"The House of Nobles - no, the entire kingdom of Stormwind will pay for their crimes against the Stonemasons."[3]

Edwin VanCleef was the leader of the Stonemasons Guild that rebuilt Stormwind City after it was sacked by the Horde in the First War. A disagreement with the House of Nobles led VanCleef to found the criminal organization known as the Defias Brotherhood. VanCleef was considered one of the greatest threats to the kingdom of Stormwind until he was killed by Alliance forces.

The reconstruction of Stormwind

Mathias Shaw was a childhood friend of Edwin, and personally trained him as a rogue.[2] Edwin also knew Baros Alexston, who saw him as a peerless fighter, an idealist and a romantic.[4]

Edwin VanCleef was the elected Guildmaster of the Stonemasons.[5] He was originally one of the architects that worked on the rebuilding of Stormwind City after its destruction at the end of the Second War. He also led the construction of Nethergarde Keep, which was commissioned to keep watch over the Dark Portal.[6] After the city's reconstruction was finished, the House of Nobles refused to adequately pay and offered only meager compensation, while the Stonemasons continued to demand extravagant sums. Both sides were under the influence of Katrana Prestor. SI:7 notes that the nobles of Stormwind ran up a huge debt by expanding the kingdom's military presence through Elwynn and into Stranglethorn. The massive debt crippled the kingdom's economy and stripped Edwin VanCleef and his Stonemasons of their promised rewards.[2] Edwin spoke out, demanding restitution for their works. In response, the Stormwind House of Nobles ordered the Stonemasons' Guild disbanded, which angered VanCleef.[5]

VanCleef and the Stonemasons set to rioting in the streets of Stormwind.[5] The riot was dangerous and chaotic and in the confusion, King Varian Wrynn's young queen, Tiffin, was brutally murdered. Varian vowed to punish those responsible and dealt with the rioters more severely. The Stonemasons, fleeing the city, hid in the rural areas of Westfall to escape prosecution. Knowing Varian's anger would never fade, many were forced to remain in hiding.[7] Edwin VanCleef fled Stormwind with the Stonemasons and formed the Defias Brotherhood.

During the riots, VanCleef's lieutenant and most trusted assistant, Bazil Thredd, was captured and placed in the Stormwind Stockade.[5] 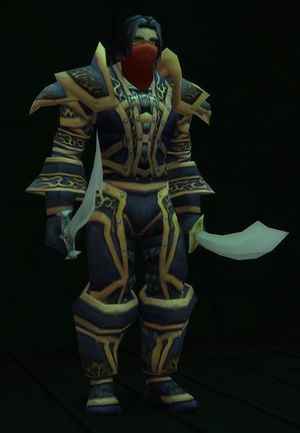 Edwin VanCleef in the Deadmines.

After he led the remnants of the Stonemasons out of Stormwind, he took advantage of the relatively unprotected state of Westfall, and used his considerable manpower to run many of the farmers off, and take over the handful of gold mines. Taking advantage of the resources at his disposal, VanCleef hatched a plan of retribution against the government of Stormwind.[5]

From aboard the ship located deep within the Deadmines, VanCleef awaited the moment at which he would strike at his hated foe. Before this could take place, however, adventurers of the Alliance, having previously learned of the headquarters of the Defias Brotherhood,[8] entered the Deadmines and assaulted VanCleef's ship. After a battle, they managed to defeat VanCleef. The adventurers took an unsent letter addressed to Baros Alexston on his body and severed his head for Gryan Stoutmantle, who said that this event marked the end of the Defias Brotherhood.[9] Yet they were left with the disconcerting worry that not all matters with the Brotherhood were yet resolved, subsequent events would prove that despite VanCleef's death, the plans of the Defias Brotherhood were underway. Conspirators with in the House of Nobles were plotting against the king and were disposed of by SI:7 agents.[10] VanCleef's death and his machinations were later informed to King Varian Wrynn[11] who thanked the adventurers in their part in foiling the kingpin's schemes. Many with in the Alliance thought that the Defias was broken. Later on, Jaina Proudmoore discovered that the Defias had been active in Dustwallow Marsh and had played a part in King Varian's kidnapping.[12][13]

While Edwin VanCleef is dead,[12] the Defias Brotherhood did not die with him. His daughter Vanessa, hiding under an alias, has arisen to become the new leader of the Defias Brotherhood. She has unleashed a plot to bring down Stormwind after witnessing the assassination of her father some five[14] years before.

He was involved in the following quests:

Edwin VanCleef was one of the greatest human engineers in history,[15] the unquestioned leader of the Defias Brotherhood[16] Small and wiry, the man has a mousy look about him. He wears the sweaty, oil-stained clothes typical of a peasant laborer, along with a short cloak and thick leather gloves. The man’s overall appearance is so common, in fact, that he would be almost instantly forgettable if not for the spotless, scarlet bandana fastened around his neck. Despite his unseemly appearance, he has a cunning look in his eyes and a partially concealed blade sheathed underneath one arm.[17] His face is now wasted and hollow; he is no longer the noble figure he once was, but is obviously corrupt.[18] Edwin VanCleef relies on his unassuming appearance to avoid most fights. When engaging in battle, he always prefers to take the offensive; he is known to frequently retreat from combat only to circle around and strike a few minutes later when his enemies have lowered their guard. VanCleef uses his longbow to surprise enemies from a great distance away, then draws his rapier and sneaks to a second hiding spot. When his enemies approach, investigating the location from which the arrows originated, he springs forth and attempts a sneak attack. He prefers to strike at lightly armored targets first in the hope that he might be able to incapacitate or kill them outright with a single sneak attack.[17] He is classified as Expert.

Edwin VanCleef was once a "roofwalker" in Stormwind with a speciality in defeating mechanical defenses. Yet, when the Horde destroyed the city, he was called upon because of the skills he learned as a child at the side of his father, a master stonemason, and was one of the first to offer his talents to rebuild Stormwind City.[19]

The reconstruction of Stormwind was an arduous task, but with such a genius as VanCleef masterminding the operation, the project was completed smoothly and in less than ten years.

After the reconstruction, however, the nobles paid the Stonemasons much less than they expected. Some of the more senior of the Stonemasons, including VanCleef, were offered governmental jobs if they’d just be quiet and play along. However, Edwin VanCleef was not willing to betray his workmen. He spat on the floor and walked out of the halls he'd built, vowing that he'd make the city pay one way or another. Shortly afterward, at VanCleef's urging, workers rioted in Stormwind City. Several people died,[15] and VanCleef with other artisans were the first to be cast out of the city gates.[19]

VanCleef took the group of artisans and tinkers sitting in the mud outside the gates of Stormwind and turned them into the Defias Brotherhood.[19]

After teaching the Stonemasons the skills he learned from the city's thieves, he helped them adapt to the wild until they had perfected their ability to ambush travelers. When the Stormwind Guard began to respond, VanCleef and the tinkers in their group augmented the abilities of the renegades with mechanical devices and weapons.[19]

VanCleef then turned to more ruthless tactics: Merchants who brought goods to Stormwind were robbed, farmsteads that provided Stormwind with food were razed, or infested with harvest golems. As VanCleef strangled Stormwind, stone by stone, he used the money he stole to pay for bands of mercenaries. Some of his men were captured, but VanCleef played even that to his advantage; inside the Stockade of Stormwind City, his men gathered a force for rebellion. Stormwind and its loyal townships found themselves under an unexpected siege, and thanks to sinister machinations of others, the towns' cries for help went unheard.[15]

VanCleef's search for a secure location where he could build a tinker's works led him across Westfall to the Deadmines. Once his laboratory was constructed, he entered the mines.[19] The brotherhood hired bandits and captured the goblins of Westfall at Edwin's command.[19] Mercenaries, brigands, criminals, soldiers,[18] outlaws and rebels[15] also joined the brotherhood,[18] and buoyed by his success, VanCleef christened his gang Defias Brotherhood.[15] And so, the Defias Brotherhood was created,[19] founded as an instrument of revenge.[18]

VanCleef and the other commanders prefer its members to master a wider variety of skills than those of a pure soldier.[20] Later on, the Defias Brotherhood, led by Edwin VanCleef, attempted to take Elwynn Forest but failed.[17]

He rarely left the Deadmines in more than two decades, yet he knew of everything happening across central Azeroth, particularly where the Brotherhood was involved. Rumors said that in the more recent years he had grown particularly zealous in his belief in technology's means to defeat Stormwind.[19]

Beneath the famed Deadmines of Westfall, located beneath the former Alliance town of Moonbrook, VanCleef commissioned the reconstruction of a huge war machine, an ogre juggernaught from the First War.[15]