Not to be confused with sea serpent.

Eels are fish found in waters of Azeroth and Outland. They were first seen as items in the original World of Warcraft, only appearing as mobs with the release of The Burning Crusade, where they shared a model with mana wyrms. While they didn't receive much attention during Wrath of the Lich King, Cataclysm added a large number of eels as well as giving them a unique model.

The eels of Draenor are known as moray. They are vicious predators, attacking anything that enters the water.[1] Adventurers appear to hold a particular antipathy towards eels, considering them among the creepiest of Azeroth's creatures.[2]

Eels in Nazjatar are known as abyssal eels.[3] 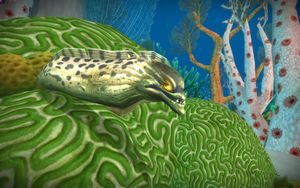 An eel in Vashj'ir. 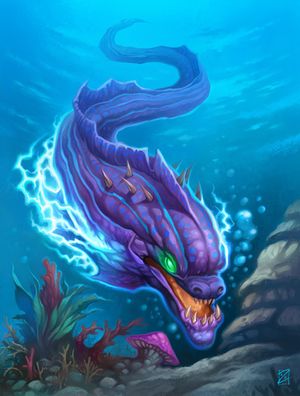 A Murkspark Eel in Hearthstone.