From Wowpedia
(Redirected from Eldre'Thalas)
Jump to: navigation, search 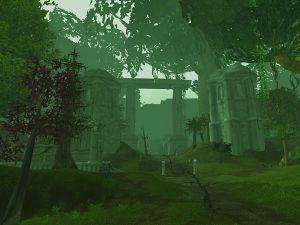 The main entrance to Dire Maul.

Dire Maul is a three-wing instance found in north-central Feralas. It was once a proud Highborne city called Eldre'Thalas (or Eldre'thalas),[1][2] but now lies in ruins, overrun by ogres, satyrs, and undead. Only a tiny remnant of the original Highborne population remains in the form of a murderous sect called the Shen'dralar. The enemy level range is 36 to 47.

This section contains information that is out-of-date. Reason: The RPG bit should be moved and replaced with Chronicle 1 info

Built twelve thousand years ago by a covert sect of night elf sorcerers, the ancient city of Eldre'Thalas was used to protect Queen Azshara's most prized arcane secrets. Though it was ravaged by the Great Sundering of the world, much of the wondrous city still stands as the imposing Dire Maul. The ruins' three distinct districts have been overrun by all manner of creatures — especially the spectral Highborne, foul satyr and brutish ogres. Only the most daring party of adventurers can enter this broken city and face the ancient evils locked within its ancient vaults. 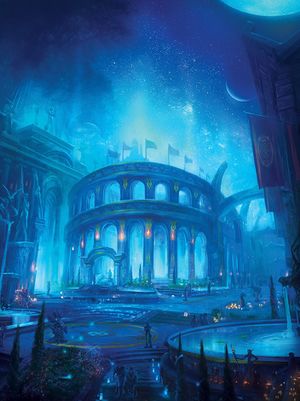 Dire Maul when it was still known as Eldre'Thalas.

Eldre'Thalas was one of the capitals of Queen Azshara's Highborne servitors. Within its walls, the elves lived in peace. Among them was a group of powerful arcanists known as the Shen'dralar.[3]

When the Great Sundering hit, the city barely escaped destruction. Prince Tothreldrin and his followers conjured a spell that shielded the city from the destructive forces of the Sundering.[6]

In Year 25, the majority of elves, including the prince, was killed by the Horde when they raided Dire Maul. The surviving ones fled the ruined city and wandered in the woods for years, trying to wean themselves off demonic power and feel whole again.[7] 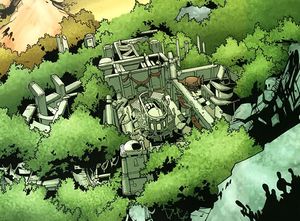 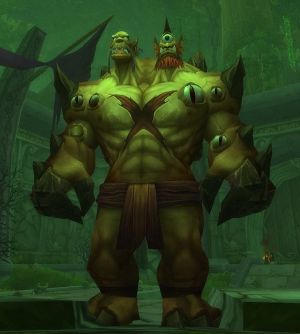 Dire Maul was lowered to a level 36-52 dungeon in Cataclysm. Cho'gall has appeared in Dire Maul and given the Gordunni Ogres power as a reward for their loyalty and work for the Twilight's Hammer clan. Despite his attempts though, Cho'gall was pushed out of Dire Maul by adventurers of the Horde and Alliance.

King Gordok had his prisoner slaves here in a pit and watched them fight in an amphitheater.

The Hidden led by Captain Malus entered Dire Maul, killed King Gordok, becoming the new leader of the Gordunni ogres. He commanded them to leave Dire Maul and search Feralas for Aramar Thorne.

Next to the amphitheater, there was a big dome of thorns, constructed by Chugara Razorflank,[9] serving as a prison for captured wyverns. It was ripped and destroyed when the druid Thalyss Greyoak planted and grew a massive oak over it.[10]

The following day, every ogre left the stronghold and Throgg oversaw its total evacuation.[11]

With the death of Malus and most of the Hidden, it is unclear what became of Dire Maul, but it is possible that the Gordunni ogres returned to it.

Built thousands of years ago to house the kaldorei's arcane secrets, the formerly great city of Eldre'Thalas now lies in ruin, writhing with warped, twisted forces. Competing covens once fought for control of Dire Maul's corrupted energy, but they have since settled into uneasy truces, choosing to exploit the power within their own territories rather than continue to battle over the entire complex.

Dire Maul contains three wings, two of which are connected, all part of the same giant map. The wings are known as Warpwood Quarter (east), Capital Gardens (west) and Gordok Commons (north). The Capital Gardens and the Gordok Commons are contained in a single instance, and used to be connected via The Athenaeum, but this is no longer the case. At the end of a long hallway not on the official map, you will now find only a dead end, and you will be displayed as nowhere, yet in the Gordok Commons. At the center of Dire Maul, connecting the three wings, is an open plaza populated by ogres and containing what was a special PvP arena. This arena known as The Maul, consisting of a rectangular pit with entrances and exits on the east and west sides, was similar to the Gurubashi Arena in Stranglethorn Vale, in that "free for all" PvP combat is permitted within its confines.

Warpwood Quarter (aka Dire Maul East ) has been taken over by the nefarious Alzzin the Wildshaper, a satyr who has corrupted the Fruit of Fertility tree so that it produces vile [Felvine Shards]. Alzzin has attracted all manner of corrupted plant life, satyrs, mages and demons to his cause. The entire district is overgrown with crazed plant life. Dire Maul East is considered the easiest of the three wings.

Capital Gardens (a.k.a Dire Maul West) is haunted by the ghosts and skeletons of deceased Highborne, and is home to a variety of arcane creatures, including ancients and mana surges. Yet the most notable resident of the Capital Gardens is Immol'thar, a demon imprisoned on this plane by Prince Tortheldrin. Millennia ago, the Prince, aided by his Shen'dralar loyalists, constructed five mystical pylons to bind Immol'thar so that they could siphon his energy to sustain their immortality. Tendris Warpwood, a corrupted Ancient of War, also resides in the Capital Gardens. It also guards the door leading from Capital Gardens into Immol'thar's prison, where players can also access The Athenaeum.

Gordok Commons (a.k.a Dire Maul North) is considered the hardest, or, at the very least, the most interesting and unusual, wing of Dire Maul. The district is now occupied by a tribe of ogres known as the Gordok. Dire Maul is unique in that parties adventuring there have a choice. They may, in the traditional fashion, kill all the various bosses in the instance for some guaranteed rare drops, or they can use a series of questing and sneaking tasks to perform a "tribute run." In a tribute run the characters only kill King Gordok, ruler of the Gordok tribe, while keeping the other bosses alive. As a reward for sparing the lives of the other instance bosses, the characters receive higher quality, though fewer, rare drops from a tribute chest. In addition, the Gordok proclaim the characters to be kings, which grants access to a variety of two-hour buffs, alcoholic brews, and the quest

Doing Dire Maul in one visit

Some tips for doing Dire Maul in just one visit: