Elekks (sometimes pluralized as elekk) are a species of large, elephant-like creatures native to Draenor[1] that the draenei commonly employ as mounts. Elekks became sickly and corrupt as a result of Draenor's fel corruption and subsequent transformation into Outland.[2]

Patient and strong, the elekk exemplify the draenei attitude towards the hardships of life.[3] 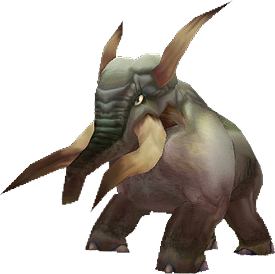 A herd of elekk in Shadowmoon Valley.

Elekks are one of the oldest living species on Draenor.[4] These majestic creatures graze contentedly across the grassy plains of Draenor, relying on their huge size and the support of the herd to keep predators at bay. Draenei explorers have determined that the animals pose no threat, as long as their young aren't endangered or their water supply jeopardized. They have the endurance to cover great distances and the ability to defend themselves by ramming or stomping attackers.[5] The elekk's long trunk allows it to sniff out sources of food, avoid danger, and steal snacks from people's bags when they're not looking.[6] While it's not stated exactly how long they can live, a single elekk's life can apparently span several orc generations.[4] Elekk tusks continue to grow throughout the animal's lifetime,[7] meaning that the best way of telling the age of an elekk is by the size of its tusks.[4] It is said an elekk never forgets.[8]

Some legends say the draenei first befriended the elekk after one of the beasts saved an injured scout from a pack of vicious podlings.[9] The draenei perfected elekk husbandry long ago, adorning the creatures with Light-infused crystals to make them more docile.[10] The intelligence and caring nature of elekk calves make them a stalwart lifelong companion.[11] When the draenei fled Outland aboard the Exodar, they carried with them a number of species, including tamed elekk. Upon landing on Azeroth, the tusked creatures played a large role in helping the draenei establish themselves on their new home. While much of Azeroth's own native wildlife has served other races as trustworthy mounts, the draenei still prefer the hearty and unyielding elekk above all else.[12]

On Outland, wild elekk can be found mostly in the northern and eastern parts of Nagrand, as well as in the south near Oshu'gun, where they congregate into large herds of hostile bull elekks led by the giant matriarch Tusker, who is said to be the queen of all that dwell in Nagrand.[13] The recent influx of different races to Outland, particularly the ethereals, has resulted in increased hunting of Nagrand's elekk for their tusks,[12] as elekk ivory is a highly sought-after prize.[14] Uniquely aggressive and pugnacious elekk bulls are culled from the herd and sold to ethereal traders. The traders then train the bulls for combat and sell them to owners unconcerned about safety.[15] The rare and elusive pink elekks will only make their presence known to those that have befriended them, or to anyone too intoxicated to harm it.[16] Exodar Elekk are elekk which have been anointed by O'ros, the naaru who journeyed from Draenor to Azeroth with Velen and his followers.[17] Never seen in Nagrand, the first red elekk calves were born in Azeroth after the Exodar's arrival. Some breeders theorize that the unique coloration is somehow caused by the same radiation which ravaged Bloodmyst Isle.[18]

Alleria and Turalyon, having spent time on Draenor, introduced elekk to the Army of the Light.[19]

On the alternate Draenor, elekk herds roam the fields of Shadowmoon Valley and Nagrand. There are persistent rumors that the orcs of the Thunderlord clan torment and twist terrified elekk into weapons of war for the Iron Horde, covering them in armor plating and inciting them to rampage when turned loose on their foes.[5] 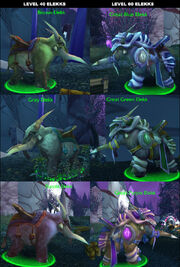 Elekk are sold by Torallius the Pack Handler located at the exterior elekk stables north of the entrance to the draenei capital of the Exodar. Irisee the Exodar Quartermaster in Icecrown also sells two unique elekks.

Since the introduction of Warlords of Draenor, a few elekk mounts have become available to the Horde.

Kessel, the draenei elekk lord in the southern part of Bloodmyst Isle, temporarily allows Alliance players to ride his elekk for 15 minutes in the quest "

[12] The Kessel Run". It provides 100% movement speed, which is enough to get to Stillpine Hold, Azure Watch, Odesyus' Landing, and then back. Players can be dismounted either manually (right-clicking the icon), by jumping into water, by entering a building/cave, or by attempting to travel across the bridge to the main part of Bloodmyst Isle. Certain buffs and spells, such as shaman weapon buffs, also dismount the player.

Elekks are tamable by hunters as part of the mammoth family.