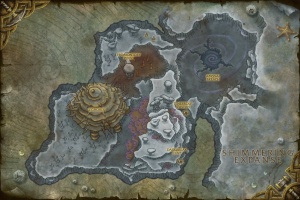 Slay the Tides of Longing and Vortexes of Longing near the Abyssal Breach until Thrall is free of their grasp.

Once again, <class>, I cannot do this without your help. I will try to quiet this tempest, but you will need to fight back the unstable elementals that whirl around it. Only then can we free Go'el!

Tides of Longing are neutral level 85 water revenants with 77,490 health and the following abilities:

Tides of Longing may split into two Figments of Longing with 15,000 health each on death.

Vortexes of Longing are level 85 elite water elementals with 542k health and the following abilities:

A similar progress bar to the one that appeared in

[85] Elemental Bonds: Doubt appears, tracking water elemental deaths. As before, each elemental is worth 5%, so it will take twenty to complete the quest.

A vision of Thrall and Varian Wrynn standing face to face appears over the breach.
Aggra says: Look there - a vision within the torrent! Is this what Go'el longed for most? Peace with his enemies - an end to the constant warring of his world?
Aggra says: He... wished to lay down his weapon... and the burdens of leadership... 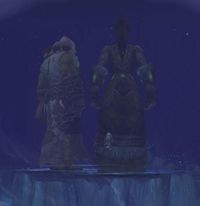 A vision of Thrall and Aggra standing face to face appears over the breach.
Aggra says: Another Vision! I see Go'el, but...it...it's me. Was I his deepest desire? A mate with which to share his life... his burdens and his joys?
Aggra says: Hear me, Go'el! You ARE NOT alone! I'm here with you - I will NOT let you go!
The two turn and walk together away as the vision fades.

A vision of Thrall, Aggra, and two orc children appears over the breach.
Aggra says: A final vision! Ancestors... could those be... our children? This was his deepest desire... to be a father?
Aggra says: ... to have a family of his own... with me? Go'el never knew his parents... It was only a few years ago that he even found his people... I should have known this was what he wanted most.
Aggra says: Oh, Go'el, hold on!, I WILL free you! And you'll HAVE this life, I swear it!

Upon reaching 100%, Thrall's desire will pull her into the vortex. Catch up to her and interact with her to free her.

Aggra says: Ancestors, give me strength! The vortex's pull is increasing! It's pulling me in! The power of his longing... it's overwhelming!
Find and release Aggra before she gets pulled into the whirpool!
Aggra says: Fight this, Go'el! You've got to snap out of it!

Once freed, Aggra swims back to her location on the lip of the breach as Hydrius swims back.

Hydrius says: You've done the impossible, shaman. You have stilled the vortex within him without losing yourself, in turn. Your love for him... must be very great.
Aggra says: I need... the world... needs him whole once again. Bue he's always placed the needs of others before his own. How long has he surpressed these feelings - these desires?
Aggra says: He must embrace them and find balance... or this curse will never end.
Hydrius yells: His aspect shifts once again! You are losing him!
Aggra yells: Go'el!

As the conversation ends, speak to Aggra to complete the quest.