As part of the Elemental Unrest, Thrall and Magni call meetings to discuss the recent earthquakes. Later during the event, Thrall relocates to the Throne of the Elements in Nagrand, holding a slightly more intimate meeting. 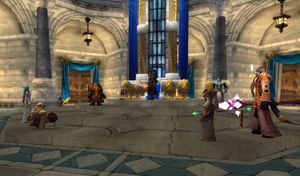 King Varian Wrynn says: We are ready to proceed. Magni, you have called this meeting. What concerns you?
Magni walks up to the third step, standing to the forward right of Varian and faces the others.
King Magni Bronzebeard says: You've no doubt noticed the string of earthquakes we've had in the last weeks. Something doesn't feel right about them.
Lady Jaina Proudmoore says: What do you mean?
King Magni Bronzebeard says: We dwarves have a connection to the earth. We can feel her pain. And right now the earth is crying out. These earthquakes... they are both natural and not. I wanted to gather you all together and discuss them.
Tyrande Whisperwind says: Even in Darnassus we have noticed the earth is at odds with something.
King Magni Bronzebeard says: I've received word from my brother Brann in Northrend. In his exploring of Ulduar he came across some unusual tablets... something ancient.
King Varian Wrynn says: Nothing good has come from that dreadful place.
King Magni Bronzebeard says: This might just change your mind. Brann is shipping the tablets to me as we speak. Preliminary reports from the Explorers' League state that they may be able to help us understand what is going on with the earthquakes.
High Tinker Mekkatorque says: Our top minds have been looking into the seismic activities... Well, we've mostly been looking at how to secure a building's frame while at the same time simulating tectonic shifts...
High Tinker Mekkatorque says: ...because on the one hand, this could be a handy device, the "Shake-a-Ton 2000". But on the other hand, the last thing we gnomes want to see is the mountains of Dun Morogh collapse and crush Ironforge.
Jaina turns to Gelbin.
Lady Jaina Proudmoore says: So is that why you have moved out?
Gelbin turns to Jaina and laughs.
High Tinker Mekkatorque says: Ha, not at all! Though it is a striking coincidence. Gnomeregan has been and continues to shame our people. It is long past time we reclaim our homeland.
King Varian Wrynn says: Well, it is good that things have turned out... better for you and your people, High Tinker. But not all of us have the luxury of up and moving our kingdom.
Prophet Velen says: And those that did know how dangerous these earthquakes can be. To this day, the Exodar is still shaking from our rather abrupt arrival.
Lady Jaina Proudmoore says: I'm not certain we could organize our people to move even if we wanted to. We've also received word of hostile elementals appearing randomly across the lands, sometimes in towns, sometimes across the countryside. Moving may not be an option.
King Magni Bronzebeard says: Well, there is at least a wee bit of good news... no offense, Gelbin. The shaking seems to have stirred up The Earthen Ring. Even the Wildhammer shaman have offered their help.
Tyrande Whisperwind says: Perhaps these events are also what have brought forth the Highborne from Shen'dralar.
Prophet Velen says: It seems as if this world is coming apart at the seams. I've seen these symptoms before, on Draenor... We may not be able to stop this. Fleeing may be our best option.
King Varian Wrynn says: Fleeing is not an option I wish to entertain at this point. We will find another way. Perhaps these tablets from Ulduar will shed some light on our situation.
Lady Jaina Proudmoore says: Hopefully we can get these answers quickly. The people are frightened, and cultists are taking advantage of that fear.
King Varian Wrynn says: These cultists only exacerbate the problem. They preach the end of the world, or that the world is having birthing pains... Hyperbole that is hard for the populace to ignore.
Tyrande Whisperwind says: Troubling times indeed. Fear of the unknown makes people do foolish things.
High Tinker Mekkatorque says: And our lack of answers only fuels the confusion.
King Magni Bronzebeard says: All the more reason we need to reach the bottom of this. This tablet from Ulduar will lead us in the right direction. Brann is sure of it. And if Brann is certain, then I am certain.
Lady Jaina Proudmoore says: I've made it a point not to argue with a dwarf when it comes to the earth. If the Bronzebeards are sure this tablet will help solve the earth's problems, then by all means we should support them.
Magni walks back to his spot. 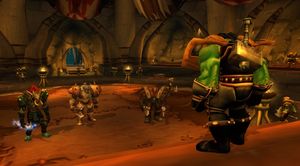 Thrall announces his plans to travel to Nagrand.

Phase 3, At the Throne of the Elements

Thrall says: Would I be here if this were not serious?
Aggra says: I have heard you before. You are here to save your world; to learn from ours. Greatmother Geyah has charged me with instructing you, and as such, you will listen to me, Go'el.
Thrall says: I have told you to call me Thrall.
Aggra says: Yes I know, Go'el. Thrall is the leader of the Horde, but you are not here in that capacity. Look at you: At what you are wearing...
(Thrall is wearing, of course, Doomhammer’s Plate.)
Aggra says: You say you have come to seek knowledge and understanding, but you are dressed for battle. That is why I question you and your willingness to do what must be done.
Thrall says: My clothing?! Is that what this has come to now? We debate the merits of my clothing?
Gavan Grayfeather says: The clothing is merely a manifestation of a larger problem. I've no doubt that you are here to learn, but you must commit yourself both in spirit and in form.
Aggra says: The dwarf speaks the truth. If you wish to commune with the elements you must do so from the heart.
Aggra says: Your heart, your love for your land and your people is what has led you here. It was neither your armor nor your weapons.
Gavan Grayfeather says: Thrall, you must fully devote yourself to the cause.
Aggra shoots Gavan a disapproving look.
Aggra says: Go'el. You cannot continue to ride the line between Warchief and Shaman. The time will come when you must commit to one side fully. That time is fast approaching.
Thrall says: I hear what both of you are saying and am grateful for the counsel.
Thrall says: If I am to understand all that is transpiring, if I am to make a difference, then my devotion must be absolute. I must submit.