Not to be confused with pandaren spirit.

The elemental spirits[1] (also referred to as the elements)[2] are the volatile elemental energies[3] of the planet. They can attain raw physical form and become elementals.[4] Every world has its own elements, its own powers to call upon.[2]

The elemental spirits are primitive and chaotic beings of fire, earth, air, or water. They were some of the first sentient creatures to inhabit the nascent worlds of the waking universe. The elemental spirits appear in an almost infinite variety of shapes and sizes. Each of these creatures has a distinct personality and temperament, traits that are heavily influenced by a spirit's elemental nature. The presence of the fifth element—Spirit—also affects the disposition of these elemental beings. A world with an overabundance of Spirit may give rise to native elementals who are passive and lack physicality. Conversely, a world with too little Spirit may birth elementals who are highly aggressive and incredibly destructive.[5]

Shamanism and a few other professions are about communing with these elements.

As Azeroth formed elemental spirits roamed the surface. As time went by these spirits became more erratic and destructive. The burgeoning world-soul was so vast that it consumed much of the fifth element, Spirit. Without this primordial force to create balance, Azeroth's elemental spirits descended into chaos.[6] With the rise of the Black Empire the Elemental Lords were enslaved as the Old Gods lieutenants. After the war between the titans and the Old Gods the keepers imprisoned elementals in the Elemental Plane.

Creatures had emerged from Azeroth's elemental past of their own free will. When the keepers had sealed off the Elemental Plane, some stragglers had escaped banishment. The fury of these spirits had ebbed over time, and they had become creatures of flesh and blood. It was from these former elementals that some forms of wildlife, such as proto-dragons, came to be.[7]

When Aggramar came across Draenor in his travels, he was intrigued by the world but foresaw doom for the planet if the Evergrowth was allowed to grow unchecked, as it would eventually consume everything on the world, including the elemental spirits. Once that happened, the Evergrowth would devour itself, and Draenor would be left a wasteland devoid of life. Aggramar's natural affinity for order compelled him to take action, but he did not wish to completely destroy Draenor's plant life, only to temper it. Thus, he would need to neutralize the Sporemounds, the heart of the Evergrowth's power and he did that by creating Grond.[8]

Elemental spirits are the source of shamans, geomancers, trancendents, and pandaren brewmasters powers and the origin of much of their knowledge. The spirits of the elements are the shaman's to command.[18]

The Spirits care nothing of the battle between order and chaos and have only a passing interest in the conflict of good and evil[citation needed] . Their role is one of cosmic balance[citation needed] , and the shamans are the mortal maintainers of that balance.[citation needed]

Recently, however, the Spirits appear to have taken sides: With the Burning Legion rampaging across the universe, the Spirits have revealed the secrets of shamanism to races who oppose the Burning Crusade; of Azeroth's inhabitants, the orcs, the trolls, the tauren, and the draenei, amongst others, may become shamans. All of these races hold a sense of balance and are dedicated to stopping the Legion from consuming their world.[citation needed]

Orcs and tauren take a more symbolic approach to spirits. The spirits they encounter on the wild plains of Kalimdor are less specific, cover a wider range, and are more likely to be spirits of earth and fire than the essences of trees or animals.[22] Orcs and tauren believe that plant-spirits, nature-spirits, and earth-spirits exist and that everyone must treat these spirits with respect. One who denies the reality of nature spirits severs her connection with the earth.[23]

The Spirit of Earth is called upon to help crops grow and destroy enemy strongholds. It is warm and nurturing in personality, as well as a firm and persistent presence.

The Spirit of Fire is the most outwardly destructive though it has lighter sides such as a hearth or candle. Under its domain, shamans can call on the aid of heat, flame, and lightning. The Fire is also the granter of visions, thus Far Seers scry using campfires. Fire tends to be the most unpredictable and undisciplined of the elements, barely deigning to speak to even seasoned Shamans unless it wishes to. Its voice is usually loud, passionate and rumbling, prone to outbursts.[2]

The Spirit of Water is a nourishing element that can quench the thirst of a weary traveler or drown an army. Water tends to be least affected by severe cataclysms, adapting quickly. Water is perhaps the most personable of the Elements; calm, clear and possessing a wry sense of humor and mirth.[2]

Spirit of the Wilds

The Spirit of the Wilds is most nebulous and complex of the spirits of the wilds. In fact, no one is entirely certain of what the Wilds represent. It seems to embody the living souls of all living things, from the most humanoids to animals to plants and even stones. The Wilds is by far the best friend and greatest enemy of the shaman; the Wilds can heal broken bodies and even restore beings to life... but only if it suits the balance. It is the Wilds that can make the shaman think he is a god - and show him that he's still mortal.[citation needed]

Tauren live in careful balance with their environment. They worship the spirits and elements of the plains on which they live.[24] Instead of negotiating with individual spirits, tauren carve representative imagery on their totems and draw power from acting in a particular spirit's name.[22] 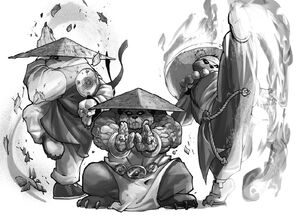 Pandaren veil their beliefs in the trappings of a mystical and ancient method called geomancy. Geomancy is shamanistic.[28] Geomancy teaches that the land is a reflection of the spirits, but that spirits are also a reflection of the land.[29] The fierce powers of the elemental spirits are for the transcendents and brewmasters to gain and command. They learn to channel the power of elemental spirits.[30][31][32][33] Tales say that spirits and energies are at work in the cosmos — spirits and energy that define the essence of reality, and from these vital sources all things are formed. This is one of the central philosophies of pandaren geomancy, and no one is more intimate with these energies than the pandaren transcendent.[34]

When the pandaren transcendent uses one of these abilities, her appearance changes to match the spirit she channels. For example, when she uses channel earth, her clothing becomes brown and she moves with slow and stately grace; when she uses channel wind, her clothing turns light blue and her movements are swift and airy. Many other possibilities exist. Upon attaining the power of the transcendent body, the pandaren transcendent finally learns to master the elemental spirits and energies under her control. Transcendents swear no loyalty other than to serve the pandaren and the spirits of their people.[32][33]

The spirit of the universe. Pandaren revere transcendents as embodiments of wisdom made flesh, residing in the shell of a pandaren host.[34]

The power of earth is that of resilience and malleability. A transcendent channels the spirit of earth to become an invulnerable juggernaut against all but the most potent weapons.[32]

The power of metal is also resilient and malleable like the spirit of earth. A brewmaster channels the spirit of metal to become invulnerable against most weapons.[31]

By summoning the spirit of fire to her breast, the pandaren is wreathed in flame.[31]

By calling on the spirit of thunder the pandaren gains uncanny reflexes and can charge the air around her with voltaic energy.[31][33]

The healing properties of water are well known to the pandaren, for this is the spirit of regeneration and well-being.[31][32]

Elevating her speed to an uncanny level, the pandaren wreathes herself in a vortex of living air.[31][33]

Quilboar thornweavers call upon vengeful spirits of nature, eschewing the peaceful spirits and the gentle side of the Earth Mother that most tauren revere.[35]

Orcs have a less organized philosophy than Tauren; they see all spirits as individuals connected in a greater whole, like members of a great clan.[26] The shamans of the orcs find their power in the spirits of nature, forming an intimate connection with the very world that surrounds them. This awareness has led to even more revelations of their race’s true nature, as the orcs realize that they live more in harmony with the world itself than many of the races of the Alliance who would claim otherwise.[36] The earth and elemental spirits desire to aid and protect those who speak to them. Orc shamans have the power of nature in their fists, and earth, wind, and fire come to their call.[37] Shamans call upon the power of the elements, which will only be granted if it suits the purpose.[citation needed]

Storm spirits, elemental spirits found in the Elemental Plane, and summoned as Lightning Guardians by Shamans.[38]