Elementalists are a type of shaman casters. They come from various races and organizations, most notably from the Earthen Ring. 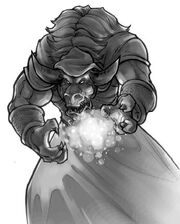 The elementalist — often a Twilight's Hammer cultist — is an arcanist who specializes in several specific elements of his choice (acid, cold, etc.).[2]