For the material from Blackwing Lair, see

Elementium Ore is the hardest metal known to Azeroth, even moreso than diamond. Very rare and difficult to find and process, it is used in the creation of extremely powerful weapons and armor. With the rise of Deathwing and the second shattering, the Ore has become more common, especially in areas that have been affected greatly by his elemental servitors, such as the Twilight Highlands. 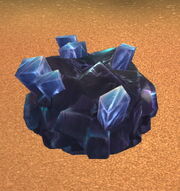 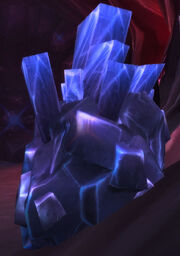 This metal is extremely rare, found only in some of the most remote regions of Azeroth. It is believed by archaeologists to have been formed during the prehistoric reign of the Old Gods, in places where there were high concentrations of elemental creatures. In fact, elementium isn't native to Azeroth, and is found only near high concentrations of elemental creatures because they bring it from the Elemental Plane where it is actually quite common.

The unique properties of elementium allow it to absorb and channel elemental forces. Skilled smiths temper elementium in blistering forges, adding to the quality of the item. All such objects are masterwork quality and are immune to cold, fire and electricity damage. Elementium is the hardest known metal. Elementium is so heavy that to craft armor from it would leave the wearer virtually immobile, so the metal is usually only used to craft weapons. Elementium has no market price. It's too rare to be available. It's not something you buy-it's something you go get.[1]