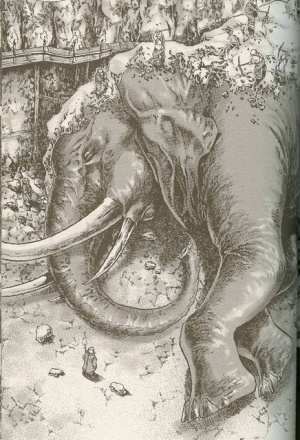 A behemoth, a creature similar to an elephant.

Elephants are large (usually larger than a horse), gray creatures with a trunk and large ears (although some species may have smaller ears), similar to elekks (which appear to have more and larger horns). They exist in the Emerald Dream[1] and Azeroth as well. Riders of elephants sit in a seat or box known as a "howdah".[2] They can be summoned by druids as nature's allies.[3]

Elephants of the Emerald Dream that have been mutated by the Emerald Nightmare into Corrupted Ones.[1]