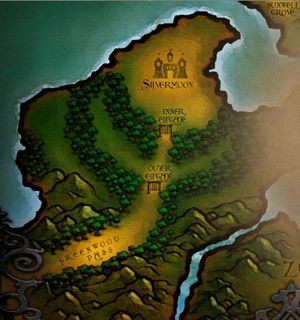 The two elfgates in Warcraft III. 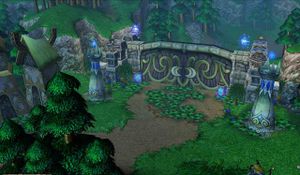 The elfgates were a pair of magical gates created to protect the kingdom of Quel'Thalas and Silvermoon City. During the Third War, when Arthas Menethil invaded the high elves' territory, Ranger-General Sylvanas Windrunner boasted to Arthas Menethil that the gates were imbued with potent magics. However, the undead Scourge led by Arthas slaughtered the high elf defenders and villagers and destroyed the first gate.[1]

The second gate was larger,[2] and could only be opened by the Key of the Three Moons, a magical item that had been split into three separate mooncrystals.[2][3] The Key of the Three Moons deactivated a field made of magical energies known as Ban'dinoriel, the Gatekeeper. Thanks to the traitor Dar'Khan Drathir, Arthas was told of the location of each of the three mooncrystals.[3] Altars of Kings[2] on intersections of ley lines at An'telas, An'daroth and An'owyn,[3] heavily protected by high elf defenders.[2] With the help of some goblin mercenaries (which were omitted in Arthas: Rise of the Lich King), Arthas and his undead army destroyed the three bases and recovered the Key of the Three Moons. After that, they opened the second gate, the now-destroyed gates of Silvermoon,[4] and marched into Silvermoon City.[2]

The first Elfgate that was destroyed during Arthas' invasion could be the gate at Thalassian Pass. However, this does not match the description from Blood of the Highborne where the An'daroth temple was said to be located southwest of the outer gate. Similarly, the term Ghostlands was said to apply to area south of the place where the outer gate once stood. The inner gate was said to be in Silvermoon City and was apparently planned to appear as a subzone.[5]

Arthas: Rise of the Lich King omits that actual gate/energy field being opened, so the event was ambiguous until Blood of the Highborne.