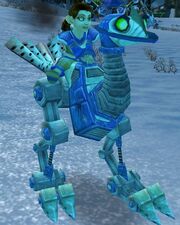 Elgin Clickspring is a gnome and assistant to High Tinker Mekkatorque. She can be found around the table discussing plans to retake Gnomeregan in New Tinkertown. She was involved in the Operation: Gnomeregan quest chain.

Following the Battle of Dazar'alor, Elgin and an Gnomish Engineer can be seen tending to Gelbin Mekkatorque's escape pod on the ship.

Hurry! You should talk to Mekkatorque! If we don't start the assault soon, we're going to be late.
And my boss HATES it when we're late.

It's my job to ensure that this whole assault runs like clockwork.
High Tinker Mekkatorque is out in the field now, but he's scheduled to come back to get some more troops any time now.
He's never late, so just stick around and he'll be here.