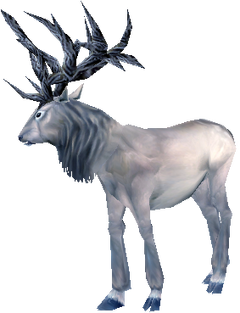 Elks are hoofed herbivores known to exist in the Twilight Highlands and the Dragonblight. 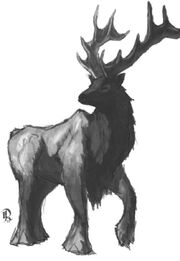 Elk from the RPG

Elk and other hoofed herbivores are prominent throughout Kalimdor. They along with other kinds of deer, are the primary prey of wolves and other predators. These food animals are not simple targets, however. The males and (in some cases) the females have antlers capable of devastating attacks. In herds, even mighty wolf packs and great cats may be hard pressed to down their target.

Elk cows are primarily aggressive when protecting young. Larger herds will huddle, forming a circle of mothers with children in the middle. The mother will attack, though if seriously injured she will attempt to flee. Bulls are likely to avoid conflict, but they can be aggressive in larger groups and when startled. They are quite agressive during mating season in the fall, and only at this time are they commonly associated with females. Antlers are present almost exclusively in males. They are shed in late winter or early spring and grown anew. Damage from a gore attack is slight in spring, and worse during the summer, with antlers reaching a decent size by fall.[1]