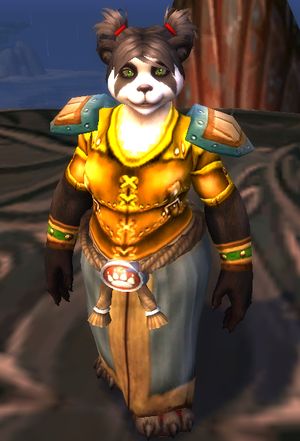 Defeat Ellia Ravenmane near the base of the Pedestal of Hope.

Ellia Ravenmane requested a rematch with you. She seems to identify you as her "rival".

We discourage rivalries here within the Cradle of Chi-Ji, but we rarely decline a rematch request. You will find Ellia near the Pedestal of Hope, on the island's eastern side.

Twice fought, twice defeated. It stands to reason that Ellia will not be requesting more rematches anytime soon.

To the southeast side of the island. Ellia's standing at the base of the steps. Speak with her again:

I've been training really hard! There's no way you can defeat me now, <name>.

Let's fight!
Ellia Ravenmane says: Today is the day I defeat my rival!

Ellia Ravenmane says: I lost to <name>, twice in a row? I can't believe it.

Some time after completing the quest, Thelonius sends a letter to the player via the in-game mail system:

The Fine Line Between Hope and Despair

Before your match today, Ellia Ravenmane swelled with hope and pride. After your victory, she lost a lot of that hope.

Your lesson for today is that hope can turn into despair in a heartbeat. Ellia is learning this lesson the hard way.