Not to be confused with Elanaria. 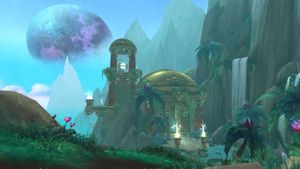 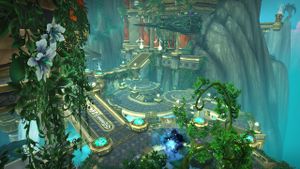 Elunaria is the world where the titan Eonar's spirit took refuge on after she was felled by Sargeras' blade. Her essence resided within her Elarian Sanctuary,[1][2][3] which would later be invaded by the Burning Legion during the Antorus raid.

The Elunaria subzone consists of the road from the portal to the Sanctuary, on a cliff-side. Daughters of Eonar roam the area while wasps and windroc-like birds fly overhead. A genesaur can also be seen. Storm drakes can be seen flying among the mountain peaks in the distance. Titan orbs are also there.