For the +10 stat buff granted to players for slaying Omen, see 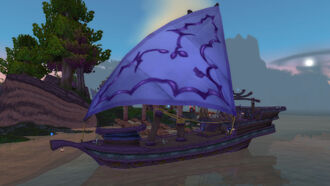 Elune's Blessing is a night elf vessel that ran between Rut'theran Village at the base of the world tree Teldrassil, and the port of Valaar's Berth, west of the Exodar on Azuremyst Isle. This connection constituted the primary transport link between the night elf and draenei races. The ship was captained by Galind Windsword.

As befits its name, the Elune's Blessing is truly blessed by the moon goddess Elune for the vessel was one of the first to discover the draenei after they crash-landed on Azeroth, according to the crew. Originally based from the port of Auberdine, the ship was eventually forced to relocate to the nearby Rut'theran following the terrible destruction of the Cataclysm.

After the War of the Thorns the boat was replaced by portals between Darkshore and Azuremyst, as it went under repairs.[1] 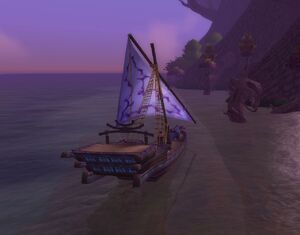