The story behind the runestone at Caer Darrow originally mentioned being placed there by "Elven Druids",[1] implying that they were high elves from Quel'Thalas. The high elves themselves were originally depicted as much closer to nature, with their reason for joining the Alliance of Lordaeron being partly because the Old Horde intended to defile the very lands of Lordaeron.[2]

The druidic night elves were later added into the lore with the introduction of Warcraft III, and the backstory between high elves and night elves was extended to show the high elves as being more in tune with magic than nature. 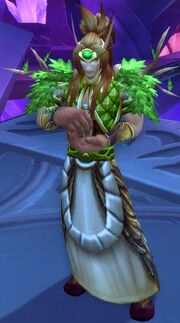 These thalassian druids have not been referred to in any canon source since. The Warcraft Encyclopedia states that "Elven magi" created the runestones that surround Quel'Thalas.[3] World of Warcraft: Chronicle Volume 1 also states that the runestones were created by Dath'Remar Sunstrider's most powerful arcanists.[4]

Despite the retcon, in the Botanica wing of Tempest Keep, several of Kael'thas Sunstrider's blood elves use abilities that are similar to the Restoration skills of the druid class, though they are never referred to as "druids". Most notably of these elves is High Botanist Freywinn, who is seen wearing what appears to be the shoulder armor and robes of the tier 1 armor set for druids, the Cenarion Raiment, and even transforms into a tree. Following encounter with Freywinn, the theme of the instance becomes increasingly arcane and corrupt, with satyrs, gene-splicers, and mutate fleshlashers, which seem to be named after the lasher, a common plant mob.[5] The degenerative nature of the instance hints that the blood elves in Botanica are not utilizing druidic practices, but corrupting the plants by other means, such as the ancient Warp Splinter who has apparently been corrupted by arcane magic.[6]

The dark rangers are said to have turned to the Forgotten Shadow in order to "fill the void left by the loss of their druidism" from when they were rangers.[7] This is the only known reference to rangers practicing any form of druidism, though high elf rangers are known to use their relationship with nature to power their spells.[8]

Savagekin, "the most primal of druids", are most commonly either half-elves or night elves.[9] While the savagekin class is available to any Alliance race in the RPG, Druids and Druids of the Wild are only available to night elves and tauren.[10][11]