For the lore of the zone and its status after the Cataclysm, see Elwynn Forest.

Elwynn Forest is the starting zone for playable humans.

Northshire was the pride of Stormwind's vineyards until recently when Defias bandits drove off the farmers and occupied the farm and fields. In addition, the Echo Ridge Mine north of the abbey has been infested by kobolds.

Kobolds infested the Jasperlode Mine and Fargodeep Mine. Gnolls have erected camps in the Forest's Edge region and the northern rim of Stone Cairn Lake. It is rumored that both the kobolds and gnolls are somehow associated with the Defias Brotherhood. Murlocs have taken up residence in and around Stone Cairn Lake and Crystal Lake. Defias presence in the region has been growing and their people have holdings at Mirror Lake Orchard, Northshire Vineyards, the Brackwell Pumpkin Patch, Jerod's Landing and Stone Cairn Lake. 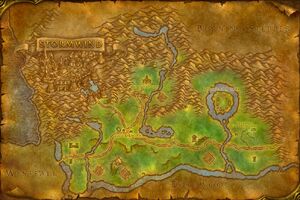 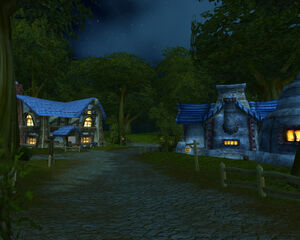 Elwynn Forest is home to several humans of high status. From the Northshire Abbey Marshal McBride recruits promising young humans into the Army. In Goldshire, Marshal Dughan leads the effort to reclaim Elwynn from the kobolds and other vile threats, and from his post near Eastvale Logging Camp, Guard Thomas seeks to eradicate the foothold the murlocs have established in the forest. Deputy Rainer is currently the leader of the Westbrook Garrison and protects the border from the Riverpaw gnolls.

Elwynn Forest is the starting zone for humans. The quest range here runs from level 1 to 12 with the earliest, starting quests concentrated in Northshire Valley. In southern Elwynn the player can witness the rivalry between the Stonefields, Malcures and Brackwells and do quests on both sides (the Brackwell Pumpkin Patch is currently overrun by Defias). The quests also include fighting the murlocs near Crystal and Stone-Cairn Lakes and the kobolds in the two big mines - the Fargodeep and Jasperlode. But the strongest recurring threat are the Defias Brotherhood (strangely, most of them are situated in Eastern Elwynn, having their base somewhere in Westfall).

Two quest chains run the adventurer back and forth between the rival farms of the Maclure and Stonefield families. Although not a quest chain,

[10] The Collector could help link the gnolls near Ridgepoint Tower to the Defias.

Northshire Valley is the starting subzone with the level 1-5 quests. Goldshire is the central village for those following most zone quests and suggested home inn for levels 6-10. Stormwind City is the capital, with all level quests geared to quests that draw adventurers to other zones. 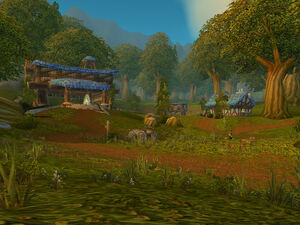 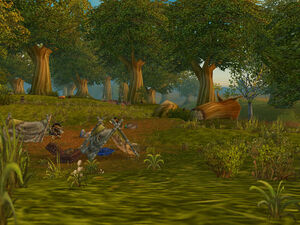