Ever since the fall of the Defias Brotherhood, these vast woodlands became far more tranquil. Nonetheless, this region, with Goldshire at the crossroads in its heart, is the prime location for trading. Most residents of Elwynn are involved in one of its major industries: logging, farming, fishing, or mining; they provide the capital, to the west, with a constant stream of food and supplies. This exchange has become increasingly threatened by kobold invasions of the gold mines, old rivalries among farmers, and attacks from wild animals, and with the army stretched thinner than ever, it falls to the citizens to restore the peace.[1]

Recently promoted to Acting Deputy, the adventurers recruited in Northshire Valley, joined by the other races of the Alliance, arrive at Goldshire. There, they are greeted by Marshal Dughan, who immediately gives them their next assignment.[2]

Marshal Dughan has received reports that the Fargodeep Mine is overrun with kobolds, so he tasks the adventurers with scouting the mine to confirm these reports.[3] At the same time, they are asked by William Pestle in the Lion's Pride Inn to gather candles used by the kobolds for their wax.[4] On the way back, they also sell their

[Gold Dust] mined by the kobolds to a crazy merchant named Remy "Two Times".[5] After reporting back to the Marshal, the adventurers investigate the more distant Jasperlode Mine, located in the foothills northeast of Goldshire.[6] Finally, Dughan concludes that he will have to increase the patrols near the mines to be able to open them again.[3]

While investigating the Fargodeep mine, the adventurers enter the Stonefield Farm, where they stumble upon an old family feud. "Auntie" Bernice Stonefield lost her necklace, but she is convinced that Billy Maclure, member of the rival family of farmers, the Maclures, had stolen it. The adventurers ask Billy whether he had indeed stolen the object, to which he replies that he is "too hungry to remember".[7] Turns out that Billy is a big fan of Bernice's Pork Belly Pies, and only those delicacies would make him remember. The adventurers hunt a few wild boars and take the meat back to Bernice. She isn't happy about it but wants her necklace back more, so she bakes the pie and they take it back to Billy.[8][9] Billy still doesn't admit his wrongdoing, but he got the pie he wanted. Apparently, a large kobold named Goldtooth stole Bernice Stonefield's necklace when Billy Maclure dropped it near the mine and took it to his den above it. The necklace is finally returned to "Auntie" Stonefield, who reveals the necklace originally belonged to her husband.[10]

William asks the adventurers in the Lion's Pride Inn for a favor. Last time he was at the Maclure Vineyards, he overheard Maybell Maclure crying in her cottage, so he wishes for someone to go check up on her.[11] She reveals that she is in love with Tommy Joe Stonefield, but because their families are bitter enemies, they cannot be together. She asks the adventurers to deliver a love letter she wrote to Tommy Joe,[12] who after reading the letter tells them to speak with his grandmother.[13] Gramma Stonefield is against the feud between the two families, so she goes to great lengths to bring the two lovers together. She sends a note to William Pestle, who asks the adventurers to collect Crystal Kelp Fronds from the murlocs living in the Crystal Lake.[14][15] He manages to concoct an

[Invisibility Liquor] that the adventurers deliver to Maybell. Even though she feels guilty for deceiving her family, she drinks the liquor and vanishes, sneaking away.[16] 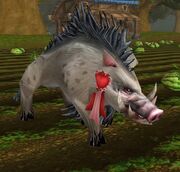 The Brackwells own a huge prize winning pig, Princess, who managed to sneak all the way over to the Stonefield Farm and started eating their watermelons. Ma Stonefield promptly asks the adventurers to kill the pig and bring her

Smith Argus, one of Goldshire's blacksmiths, needs to request a shipment of armor to Osric Strang, owner of the Limited Immunity shop in the Old Town in Stormwind City, since the supply levels are dwindling due to the high numbers of new recruits.[18][19] The adventurers quickly arrange to be transported on gryphons to the city, deliver

[Osric's Crate], containing the supplies requested, back to Argus.[20]

Remy "Two Times" wants the adventurers to speak with Marshal Dughan about the murloc threat to the east. Since he cannot afford to send more troops east without a military report, he asks the adventurers to go speak with Guard Thomas, who confirms the murlocs have been behaving aggressively.[21][22] Thomas then entrusts them with finding two guards, Rolf Hartford and Malakai Stone, who were sent to investigate the murloc threat but had not yet returned.[23] Both guards were found dead in the murloc village, so Guard Thomas decides that the murlocs are a threat that can no longer be ignored.[24]

The adventurers help the local population with advertised bounties and collecting wood. From murlocs to wild wolves, and a bounty on a local bandit named James Clark, here the army is stretched thin as well. After killing James Clark, the adventurers find with him a

[Gold Pickup Schedule], detailing the gathering of the gold collected from the Elwynn mines.[25] The man in charge appears to be called The Collector, and resides in the Brackwell Pumpkin Patch, which is now overrun by bandits.[26] The adventurers kill the Collector and bring his ring to Marshal McCree, back at Eastvale. He recognizes the ring as a membership ring from the Stonemason's Guild, an object he hasn't seen since the Defias Brotherhood leader, Edwin VanCleef, had been defeated years before.[27]

After the gold mines investigation, Marshal Dughan has one final assignment. The Westbrook Garrison, on the western border, has been sending reports of increasing gnoll and thief activity, and has been requesting more reinforcements, which the army does not have.[28] The adventurers go help the soldiers deal with the Riverpaw gnolls and their leader, Hogger.[29] When he is severely injured, Hogger tries to run away, but word has been brought to Stormwind already, and General Hammond Clay is suddenly teleported in, with Maginor Dumas to his left and High Sorcerer Andromath to his right. Together, they arrest Hogger and the Riverpaw gnolls, and take them to the Stockade, Stormwind's high-security prison complex.[30]