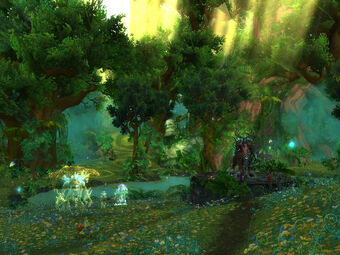 This area is the ancient heart of the Emerald Dream. Ysera used to rest here.[1]

Map in the Emerald Nightmare raid.

After Xavius is killed, the Rift of Aln from the Emerald Nightmare disperses. Players appear in the Emerald Dream restored, where a purified Cenarius stands on a dais of titan design, surrounded by the redeemed souls of those taken by the Nightmare. The spirit of Ysera can silently lead one across a lake and inside a cave to a foreboding flower.

[Heart of Azeroth]. Once in the ancient heart of the Dream, they were shocked to find Void corruption in it.[1] The champion fought and vanquished the corruption, including the one who drew it out, the Void Horror. Inside Ancient Rest, the champion found some void roots and after purifying them, a Remnant of the Void appeared.[2] Once the area had been cleansed, the emerald shards were thrown into the lake and Merithra, alongside some of her flight companions, used the flames of the Emerald flight to reforged them into the