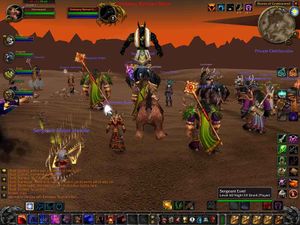 A Horde raid faces Roman'khan (prior to patch 2.3)

Emissary Roman'khan was an outdoor mob in Silithus which is spawned by a quest. Prior to patch 2.3, he was much stronger and required a small raid to kill. He doesn't drop anything but the item required for the quest. The quest that spawned him was removed in Patch 4.1.0 for unknown reasons, and he can no longer be summoned.

Emissary Roman'khan is spawned by the quest

[Crystal Unlocking Mechanism]. This encounter was designed for 20 people, but the quest would allow you to do it with up to 40.

The reward from completing the quest comes in the form of 2 blue items.