“As Shaohao reflected on his journey, he looked to the land and saw a single blossom in the wind. 'No matter the burdens I faced', he thought, 'the land provided guidance. But the truest answers always came from... within.' And then, it became clear. 'I was to have a long life, and a prosperous realm. But I am more than just emperor. I now know what I must do. For I... am the heart of Pandaria.'”

— Lorewalker Cho, retelling the tale of Shaohao becoming one with the land[4]

Emperor Shaohao was the last emperor of the Pandaren Empire on Pandaria. Shaohao is a significant figure in pandaren culture and history. It was his actions that caused Pandaria's separation from the rest of the world prior to the War of the Ancients, due to the Sha of Pride using Shaohao's power and arrogance to cloak the land in mists. These actions saved Pandaria from the Great Sundering, but doomed it to a future of stagnation. The last emperor then became one with the land, and watched over Pandaria in spirit for over 10,000 years.

With the Alliance-Horde war coming to Pandaria's shores, Shaohao became more active, sharing his wisdom with the Alliance and Horde, warning them of the Sha of Pride, and helping them to become stronger on the Timeless Isle.

According to legend, Shaohao studied at Tian Monastery.[5] He was crowned 10,000 years ago. Following tradition, he sought the counsel of the great Waterspeaker of the jinyu who, instead of good news, delivered him a terrible prophecy: a kingdom of sorcerers was calling forth a host of demons from a great well, green fire rained from the skies, and the world's continents will soon be shattered.[6]

Forlorn and without hope, the last Emperor ascended the sheer slope of Mount Neverest. Daggers of cold sliced through his silken robes, and the biting wind heaped scorn on his journey. Only at the very peak of the mountain did the emperor find quiet and solace, and here he spoke with the Jade Serpent, the spirit of wisdom. The Jade Serpent urged Shaohao to divest himself of his burdens, to purify his spirit, and to become one with the land. The Emperor was perplexed by the Jade Serpent's council, but no further answers were to be found atop the frigid peak. Dejected, Emperor Shaohao trudged back down the mountain to consult his companion, the Monkey King, and determine his next move.

Shaohao meditated for three days and three nights, for the counsel of the Jade Serpent was unclear. How could one purge oneself of all doubt? Weary of waiting, Shaohao's travelling companion the Monkey King whittled a strange grimacing visage out of bamboo. He urged the Emperor to place the mask of doubt on his face. While mischief was the Monkey King's motivation, the mask worked - As Shaohao pulled the mask away, his doubts took on a physical form. For seven hours they fought, until the Sha of Doubt was buried. And from now on, Shaohao finally knew what must be done, and his journey to purge his negative emotions begun. He traveled to each temple of the August Celestials, purging himself with the help of the Monkey King and the August Celestials, imprisoning the Sha of Doubt, Despair, Anger, Fear, Hatred, and Violence beneath the ground.[7][8][9][10][11]

After defeating the sha, Shaohao established the Shado-Pan to continue to watch and protect against the sha menace. The Emperor was forever changed, and as he set forth of the final leg of his adventure, he was a creature of faith, courage, patience, love, and peace, a creature of pure light. At the dusk of the final day, the sky was bathed in green fire, and the very ground trembled in terror. But the Emperor was not afraid. His mind was clear of any doubt or despair. He feasted and he sang as the sky tore open. Seeing fear and doubt in his subjects' eyes, Shaohao told them that one should live each day to its fullest, and sleep each night with the peace of a mind unburdened.

It is said that all the trees in the vale blossomed as he entered, and continue to blossom to this day. He ascended to the "Terrace of Eternal Spring" (possibly meant to be the Terrace of Endless Spring), to separate Pandaria from the rest of the world. But try as he might, he was unable: the ground trembled, but did not move. Soon, he began to doubt, and the Sha of Doubt began to emerge from the east. He began to fear, and the Sha of Fear began ripping out its shackles to the west. Desperately, he called out to the Jade Serpent for help. Yu'lon circled the Vale, and explained that Pandaria is more than just the Pandaren Empire; the mantid to the west were as much a part of the land as Shaohao's empire behind the wall. Seeing that all things were connected in an eternal whole, and that his beloved land was more than just the Pandaren Empire, Shaohao at last understood. His staff clattered to the floor as his spirit became one with the land. When the world tore itself apart, Pandaria drifted quietly into the ocean. And as the Emperor's robes fluttered empty to the ground, the land became enveloped in impenetrable mists, hidden away from the rest of the world.[12] However, despite having been thought to have defeated all of the sha, Shaohao had held on to one vice — the Sha of Pride. It was through the emperor's pride that Pandaria was cloaked in mists, as he thought that the residents of Pandaria were better than the rest of the world and could solve their own problems.[13] Shaohao's staff remained on the ground until the monks of Tian Monastery found it and took it to the Terrace of Endless Spring for safekeeping.[14]

After Emperor Shaohao disappeared, the power in Pandaria shifted to the local level. With all threats walled off there was no longer a need for an emperor anymore, making Shaohao the last Emperor of Pandaria.[15] 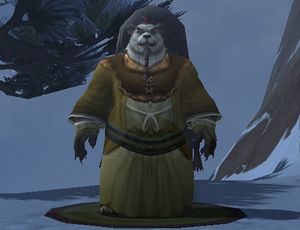 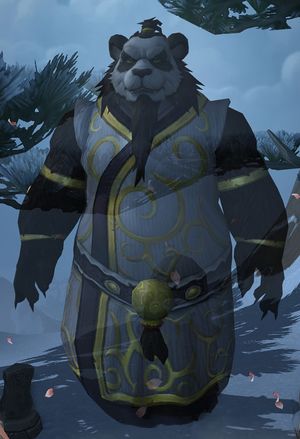 As the war started to escalate between the Horde and the Alliance, the Darkspear trolls had started a rebellion against Warchief Garrosh Hellscream. The legendary brewmaster Chen Stormstout was involved. Amidst the strife, Chen decided to learn how the mists of Pandaria had parted and given Hellscream the chance to seize control of the resources from the continent. He sent adventurers to find an old Seer he had met during his travels named Hao Pham Roo, an expert on Emperor Shaohao.

In Kun-Lai Summit, the adventurers found Seer Hao was too old to follow the trail of the last emperor at the mountainside of Mount Neverest. He requested the help from the adventurers to help him climb to the pinnacle in order to continue the path. Humbly, the adventurers patiently aided the old pandaren as he shared his past experience along the way. When they finally reached the destination, Seeker's Point, Seer Hao revealed his true identity: the spirit of Emperor Shaohao. The journey was meant to be a lesson teaching that the most insidious vice - Pride, the one burden Shaohao never conquered - would eventually fester whenever allowed. Thus, old enemies must work together and proud races must admit they need help.

After Shaohao finished his lesson, he vanished with a bow.[16]

The spirit of Shaohao awaits adventurers to participate in the Celestial Tournament and announce the August Celestials to be called up for a challenge as World Bosses. He also works with the adventurers to unveil the mysteries of the isle and to fight the Ordon yaungol led by Ordos who decided to call for the power of fire lords.

After Garrosh Hellscream was defeated and Pandaria purged from the sha, Lorewalker Cho and adventurers witnessed how the spirit of Shaohao began the healing of the Vale, planting a seed of a blossoming tree.

Vale of Eternal Blossoms
Do not despair the damage that was done here. You triumphed over the darkness I had locked away. You have shown Pandaria the power of a true hero. But the question still remains... why do we fight? I trust you have learned: to fight out of fear or anger is to fight a war that never ends. Face your fears. Calm your hatreds. Find peace within yourself, so that you may share it with the world around you. These are the greatest treasures in life. Surely they... are worth fighting for.

Why do we fight?