For enchanting in World of Warcraft, see enchanting.

Enchanters (enchantresses) imbue an object — or person — with magical power.[1] Like other arcane schools, enchanting can be attained through several magical disciplines.[2][3][4]

They acts as trainers and vendors. Several became arcane reforgers.

In World of Warcraft, an enchanter is a character who has learned the enchanting profession. 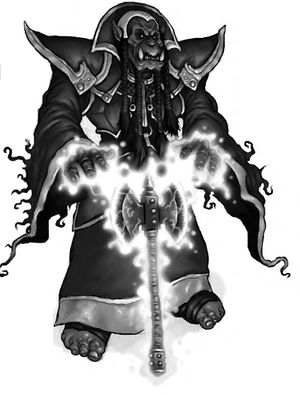 An orc enchanter from More Magic and Mayhem.

Enchanters are those who enchant normal items to give the items magical abilities or enhance already magical items. They also destroy magical items in order to get materials to enchant other items.

The creation of a magic item is a difficult and time-consuming procedure that is mentally and physically draining. The craftperson must put a little of himself into every magically empowered item he produces, leaving him ever so slightly diminished from his efforts.

Some have sought an alternative to this method: the path of the enchanter. Enchanters learn secret ways to seize the arcane or divine power imbued within every magic item, drawing it into themselves as the item is destroyed. They then redirect this raw energy into an existing item through the use of mystical formulas only they can hope to understand. The refocused magic provides the object with new abilities, above and beyond what it may already possess.

Enchanters are often tradespeople, working either alone or alongside those who craft standard magic items. The enchanter's skills overlap with those of the craftspeople, so that both working together can produce a thriving business. As enchantments enhance existing magic items, members of this prestige class are frequently in high demand among adventurers looking to squeeze a little bit more "oomph" out of their existing equipment without breaking the bank in the process.

Arcanists are the most likely to choose this prestige class, often as a way of making money when not in the field adventuring or doing research. Humans are by far the most numerous in the ranks of the enchanters, although gnomes and goblins also dabble in the art. Members of all races may learn this profession.[5]

Through experimentation with arcane energies, the enchanter learns to destroy magic items and seize the raw power within them, drawing that energy into into himself for use in performing enchantments. items destroyed must be a type other than scrolls or potions — the energies within those items are too random and ephemeral to be of much use in the enchanter's craft.

Breaking an item to absorb its power is a process referred to as disenchanting the item. The act requires the item's sundering in a controlled manner while the enchanter recites arcane rituals and mentally prepares his body to contain the mystical energy. Even so, he can perform the act fairly quickly, even in remote environments. The enchanter requires a full minute of undisturbed activity, which concludes with the destruction of the item — usually with a blow from a heavy or sharp object. If the item cannot be broken (say if it is made of adamantine or is an artifact) it cannot be disenchanted. Many enchanters carry adamantine hammers with them for use on particularly stubborn objects.[6]