Endgineer Omegaplugg is a hidden leper gnome boss that is riding a steam armor that can be summoned in the Tinkers' Court in Gnomeregan after defeating Mekgineer Thermaplugg.

Endgineer Omegaplugg is designed for a party of max-level players and should not be attempted by parties clearing the instance normally.

Getting there and spawning Omegaplugg 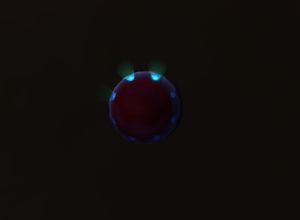 The PUSH ME! button. It may appear smaller than it seems. 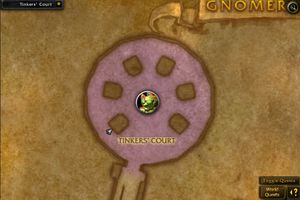 The PUSH ME! button location in Gnomeregan.

Horde players can talk to Scooty at Grom'gol Base Camp in Northern Stranglethorn to teleport directly to the instance. Alliance players should teleport to Ironforge and fly through New Tinkertown to get there. In the exterior part of Gnomeregan, take the elevator to the lower level, then take a left in the Train Depot and head to the southern instance line (the front door).

Defeat Mekgineer Thermaplugg, then look behind the first column on the left to find a tiny button labeled PUSH ME!. Press it to spawn Omegaplugg. 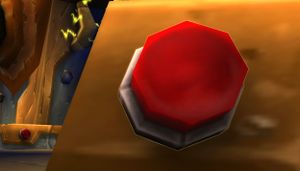 Two of the six Buttons in Gnomeregan

Start by resetting the encounter by pulling Omegaplugg out of the room. Steer well clear of the bombs!

Once the encounter resets, quickly run around the room (using Rocket Boots may be very useful) and press all the Buttons on the columns surrounding the room. This only has to be done once per instance reset - the bombs should no longer spawn once all six buttons have been pressed once.

If the bombs keep spawning after pulling, reset the encounter and try doing the buttons again.

Omegaplugg hits like a truck, so a player in tank spec is highly useful.

Here is the game:

Aggro
Usurpers! Gnomeregan is mine!

Although Omegaplugg was added with the Legion expansion, his presence wasn't widely known until nearly 2 months later on October 19th with a hotfix note.