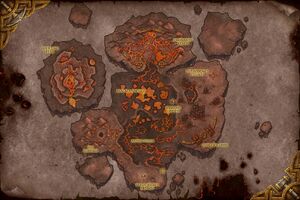 Find your way to the Igneous Depths, then destroy all 8 of the blue runes within.

Shalis has gone with one of our druids to stop a Druid of the Flame that is performing a summoning ritual in the Igneous Depths, below us. They have been tasked with killing the druid, but I need you to stop the ritual.

You'll find the entrance to the cavern east of the Magma Springs. Once inside, you'll see 8 blue runes spread throughout the cavern. You can use these runes to protect you from the fiery creatures, but you need to stamp all of them out to end the ritual. You will need to be swift.

You must destroy the runes! Hurry!

They've been attempting to start rituals of this sort all over the Molten Front, but we've been able to thwart them every time so far. Hopefully you will be present in the future to help us keep up that trend.

Marin will offer this upon completion of her first daily quest at the Forlorn Spire. Head down the ramp back to the Ashen Fields, immediately turn north and head up to the Magma Springs along the eastern wall of the cliff. The entrance to the depths can be found at [57.7, 49.5]

, where Theresa Barkskin and Shalis Darkhunter are waiting near the corpse of a Devout Flamecaller.

Theresa Barkskin says: The summoning runes were already drawn when we arrived. You'll need to destroy all of them.

Run into the cave and start looking for blue runes on the ground. However, Unstable Flameragers are constantly spawning, aggroed upon whomever is foolish enough to be running around inside the cave. They run fairly slowly, but if they catch up, they will hit for 5000-5700 Fire a swing. Additionally, fireballs are getting launched from the lava pools. Anyone standing in their shadow when they land will take ~13000 Fire.

There are eight runes. Triggering a rune will kill every flamerager aggroed upon the player within 50 yards or so, but will not kill all flameragers currently active. 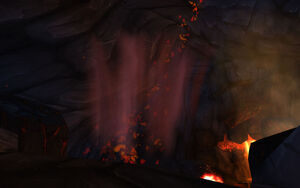 One of the Thermal Vents in the Igneous Depths

Two runes are relatively out of the way. One is just to the left of the entrance at the northern tip of the cave and can be accessed by either jumping up the wall or running to it from the northeast side of the cave. The other one is at the southern end of the cave. At the southeast end of the main path is a thermal vent. Jump while standing in it and it will launch players toward the southern island with the isolated rune. Another thermal vent can be found at the other end of the island to launch back to the main path.

Once the eighth rune is destroyed, the flameragers will stop spawning, so run back to the entrance in peace. Shalis Darkhunter offers the next quest,

Shalis Darkhunter says: Well done, <name>. It looks like we have them on the run. 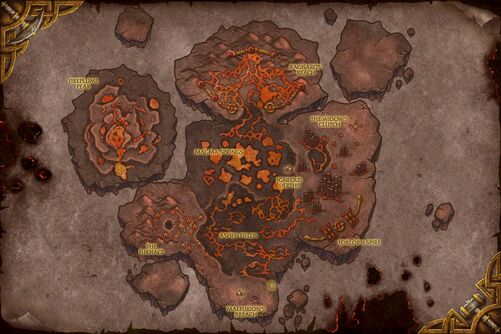