Engineers are practitioners of engineering. They are of many Azeroth's races and are affiliated with various factions.

Under the guidance of uncooperative mo'arg engineers, demon hunters were able to create several portals to Mardum.[1]

In WoW, they act as vendors or trainers.

Engineers in the Warcraft games 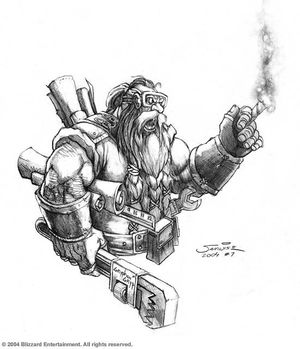 With the rise of technology in the world of Warcraft, tinkers are becoming common among almost all factions and races. A rarer breed, however, are the geniuses among the tinkers who focus their intelligence on a particular type of technology and can lead impossibly ambitious projects that turn fantasy into reality. The earliest of these prodigies developed the phlogiston-powered boilers that allowed the goblins to replace their scout balloons with enormous zeppelins, and the Horde to take its ironclad juggernaughts to sea. They named themselves after their work, and those who have followed in their footsteps honor them by taking that title for their own.

An engineer chooses a particular type of technological device in which to specialize (e.g., steam armor, zeppelins, siege weapons, traps). Later, as he becomes more experienced, an engineer selects a second and third field of specialization. However, as an engineer focuses his tinkering genius, his more general mechanical abilities suffer.

Engineers understand the process of mechanical creation so well that they can organize the efforts of tinkers in order to create larger or more complex devices together than they could individually. An engineer gains the ability to lead group projects with efficiency. His knowledge determines the technological limits of any device construction project he leads. In addition, as long as he supervises and participates in the construction of the device, it is completed before the progress is greater than the item’s market value. The engineer must supervise and make weekly progress on the project, or he is no longer considered to be leading the project and completion reverts to the normal standard where costs may exceed market value.

Engineers learn how to draw plans that allow devices they’ve built to be recreated more easily. If an engineer has been personally involved in the creation of a device, at any time after the device’s completion an engineering can check over his craft. Success on this check allows the creation of schematics that may be passed along to other tinkers. Use of these schematics makes it easier for those involved in constructing a copy of the original device. Engineers do not make use of their own schematics.

An experienced engineer has such rapport with technology that his devices are less likely to malfunction under his watchful eye.[4]