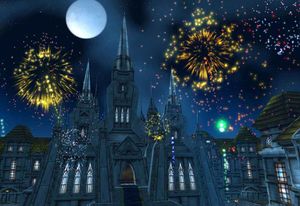 Deep within the cavernous halls of the Undermine, goblins labor and toil over their strange and fanciful engineering creations. When they are not constructing powerful devices of destruction, they find making fireworks a diverting pastime. They work tirelessly over strange chemical concoctions used to produce precisely the right color and, of course, spectacular explosions. It is an art form that comes naturally to those who find great pleasure in making things explode in a variety of ways. Competition is fierce among the engineers as they strive for perfection within their pyrotechnics.

Since holding an exhibition indoors — particularly within range of a goblin engineer's workshop — is completely out of the question, it was decided by the Tinkers' Union that a day would be chosen wherein the pyrotechnicians would go out into the world and share their creations with the world (for a modest fee, of course). For one glorious day, the sky would be alight with the fantastic creations of engineers throughout Azeroth.

Whether Alliance or Horde, these pyrotechnicians are more than happy to help you set the sky on fire during the Engineers' Explosive Extravaganza. (Just remember, point all incendiaries away from the face.)[1] 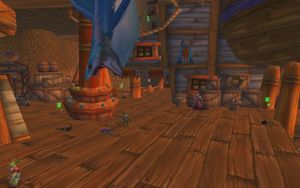 The guards of Booty Bay hit hard, and drink heavy.

It is celebrated on or near July 4th (coinciding with the United States of America's Independence Day). It is not listed on the European calendars which instead list Peon Day on September 30th (with the same icon). This event has now been incorporated into the Midsummer Fire Festival, and is referred to now as the Fireworks Spectacular.

During the event, the following event-only vendors spawn:

They sell these items: