Enormous Shawn Stooker is a level 35 worgen found aboard the The Crimson Veil in the Cape of Stranglethorn.

He can buff himself with "Hulk" (physical damage dealt is increased by 30%; he can apply it up to 3 times for 90% damage increase). He gets larger each time he invokes it.

What can you tell me about the Brashtide Crew? 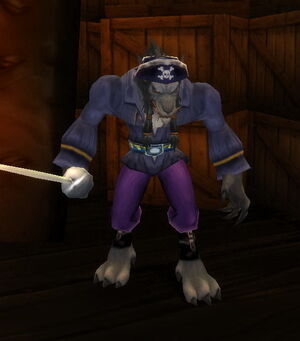 Shawn in his worgen form.

This NPC's name is a reference to a line in the movie Young Frankenstein, in which a character remarks that the monster must have "an enormous shvanstooker."

Killing him earns the player the following reputation: