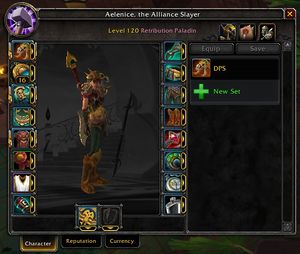 The Equipment Manager is a tab within the paper doll that allows switching between sets of equipment.

The player can create and alter multiple sets, and switch between them at will. Each set can include a specific item for each slot, or can choose to ignore that slot. Players can also choose titles and icons for their sets. Once created, gear set icons can be added to hotkeys to enable access without opening the Equipment Manager itself.

Let's assume Prot is your primary spec and Ret is your secondary and you want to swap gear at the same time you swap specs, then your macro would be:

Again, on the /equipset macro, you have to use the exact name that you saved your gear as, and it is case-sensitive. (Modified from [1].)

This feature has similar functionality, and is probably largely based on the popular auto-armor-equipping addons such as ItemRack and Outfitter.

Was scheduled for release in Patch 3.1.0, but has since been removed from PTR.[1]