This article is about the character biography. For other uses, see Eranikus (disambiguation).

Eranikus was a green dragon of the green dragonflight, consort to Ysera and was among the greatest of the green dragons. Ysera gave him the task of guarding the Temple of Atal'Hakkar in the Swamp of Sorrows. However, Eranikus went insane not long after he entered the temple. Since then the trolls in the temple have dispatched a group to Zul'Gurub, and succeeded in summoning Hakkar into the world.[citation needed] [2] Of all the green dragons, only Ysera herself was stronger than Eranikus.[3]

The green wyrm eventually sacrificed himself to help Malfurion Stormrage and Tyrande Whisperwind in the War Against the Nightmare, redeeming himself in death.

Having been the dragon tied to the Idol of Remulos, it is said that the dragon roared loudly during the fight of Broll Bearmantle against Azgalor.

After Ysera, the Aspect of the Emerald Dream, had learned of the Atal'ai's plans to summon Hakkar the Soulflayer, she smashed the Temple of Atal'Hakkar below the marshes, attempting to destroy the trolls in order to stop their attempt to awaken the Soulflayer. The great Emerald Wyrm Eranikus was dispatched to deal with the Atal'ai priest, along with his friend Itharius, and four young drakes under his direct command: Dreamscythe, Weaver, Hazzas and Morphaz. Eranikus and Itharius destroyed Hakkar's physical manifestation and believed they had succeeded. However they had underestimated Hakkar and Eranikus succumbed to the same corruption which currently plagues the Emerald Dream. The Atal'ai survived, and resumed their efforts to awaken Hakkar.

In World of Warcraft, upon defeating the Shade of Eranikus in the Sunken Temple, a player character may receive the

[Essence of Eranikus]. Eranikus asks you to cleanse his soul in the essence font but instead becomes trapped within the trinket, the

[Chained Essence of Eranikus]. He begs you to release him by seeking out aid from the green dragonflight, and threatens to kill you if you don't. If you choose to give up the trinket it may be given to Itharius in the Swamp of Sorrows, who sends the player to Umbranse the Spiritspeaker, where the questline ends abruptly.

The Tyrant of the Dream

While the Sunken Temple questline has not been continued, Eranikus features prominently in the Scepter of the Shifting Sands questline.

The mortal races wish to open Ahn'Qiraj and put a rest to the Qiraji threat once and for all. In order to accomplish this the Scepter of the Shifting Sands must be recombined. One shard was entrusted a thousand years ago to Eranikus by the bronze wyrm Anachronos. The mortal champion is sent to the Sunken Temple to discover Eranikus' fate. Upon visiting a spectral form of Malfurion Stormrage near Eranikus' shade, the champion is sent to an ally of the Archdruid, and is instructed to gather shards of the nightmare from each portal to the emerald dream. He or she is then sent to Keeper Remulos in the Moonglade.

Keeper Remulos opens a portal into the heart of the Dream over Lake Elune'ara, from which Eranikus emerges. Eranikus, still under the control of the Old Gods, demands the body of Malfurion Stormrage. The champion and allies are asked to defend Keeper Remulos from dozens of Nightmare Phantasms, that have accompanied the fallen green to the mortal plane, until the arrival of High Priestess Tyrande Whisperwind. As the phantasms are defeated, Eranikus lands himself and attacks the son of Cenarius. Eventually, Tyrande arrives with a half-dozen Priestesses of the Moon. Together they channel the powers of Elune in a prayer to redeem the cursed dragon.

Ceasing to fight, Eranikus changes into the form of a night elf — apologizing for all the harm he had wrought — and leaves to attempt to begin to make amends for his actions. He returns to Malfurion, Cenarius, and Ysera to continue the battle raging within the Emerald Dream.

As a green dragon tied to the Idol of Remulos, Eranikus made an appearance battling against Broll and Lo'Gosh who were trying to obtain the idol from the Thistlefur furbolgs. During the battle, Lo'Gosh had to distract Eranikus as Broll entered the Emerald Dream where he regained his druid's powers and cleansed the idol. When Broll returned, Eranikus disappeared.

After being freed of the corruption of the Emerald Nightmare, Eranikus flew back to the Emerald Dream. However, when he felt the Nightmare calling to him again, he fled back to Azeroth for fear that he would again be corrupted. He hid in Ashenvale for many years until he was found by Lucan Foxblood, Tyrande Whisperwind, and Broll Bearmantle, who convinced him to transport them to Bough Shadow. There, they were attacked by Lethon, Emeriss and shadowy satyrs. The two dragons tried to corrupt him once again, but Alexstrasza came and the dragons were forced to leave. Though initially unwilling to help for fear of being corrupted again, he was eventually convinced to return to the Dream when Alexstrasza informed him that Ysera knew and understood why he turned back, and reassured him that she had not yet been taken by the Nightmare.

During the course of the War Against the Nightmare Ysera was captured, but when Eranikus learned she was still fighting against the corruption he went immediately to rescue her. As Malfurion aided in penetrating the barriers of her prison, Lethon appeared and attempted to corrupt Eranikus once more. As Eranikus's body was warped and twisted by the energies of the Nightmare, Lethon preached about a future where the walls of the Emerald Dream would break down, and the dragons of Nightmare would fly Azeroth's skies unimpeded. Unwilling to let that happen, Eranikus shifted them both into the unstable boundary between the Emerald Dream and Azeroth. Though Lethon tried desperately to draw upon the Nightmare's power, the chaotic energies between the two worlds tore him apart, unleashing the Nightmare's power in a fiery maelstrom. Eranikus made no attempt to avoid it, and was consumed.[4]

Despite Eranikus's death, his shade still remains within the Temple of Atal'Hakkar, where the Atal'ai priests have been further corrupting it with Hakkar's blood.[5]

Quotes from the trapped Eranikus

I sense my grip on the Dream twisting into chaos.
Will the nightmare ever end?! I cannot force myself awake!
My soul is not a trinket! Mortal, you must release me from these chains!
My eyes! It burns... it burns...
Torture me no more! Release me, mortal! The Swamp of Sorrows... mortal... please...
Foolish mortal, I will rend your soul in two once I am released!
Foolish mortals you do not yet see the potential of that Artifact.
You are an agent of their wicked god, fool. I will see you destroyed!
It hurts so much... Itharius, my old friend... Please help me... 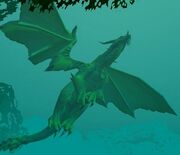 Remulos says: We will locate the origin of the Nightmare through the fragments you collected, <name>. From there, we will pull Eranikus through a rift in the Dream. Steel yourself, <class>. We are inviting the embodiment of the Nightmare into our world.
Remulos says: To Nighthaven! Keep your army close, champion.
Remulos says: The rift will be opened there, above the Lake Elun'ara. Prepare yourself, <name>. Eranikus's entry into our world will be wrought with chaos and strife.
Remulos says: He will stop at nothing to get to Malfurion's physical manifistation. That must not happen...We must keep the beast occupied long enough for Tyrande to arrive.
Remulos says: Defend Nightaven, hero...
Eranikus, Tyrant of the Dream, has entered our world.
Eranikus yells: Pitful predictable mortals...You know not what you have done! The master's will fulfilled. The Moonglade shall be destroyed and Malfurion along with it!
Remulos yells: Fiend! Face the might of Cenarius!
Eranikus, Tyrant of the Dream lets loose a sinister laugh.
Eranikus yells: You are certanly not your father, insect. Should it interest me, I would crush you with but a swipe of my claws. Turn Shan'do Stormrage over to me and your pitiful life will be spared along with the lives of your people.
Remulos yells: Who is the predictable one, beast? Surely you did not think that we would summon you on top of Malfurion? Your redemption comes, Eranikus. You will be cleansed of this madness — this corruption.
Eranikus yells: My redemption? You are bold, little one. My redemption comes by the will of my god.
Eranikus, Tyrant of the Dream roars furiously.
Remulos says: Hurry! We must find protective cover!
Remulos says: Please, champion, protect our people.
Eranikus yells: Rise, servants of the Nightmare! Rise and destroy this world! Let there be no survivors...
Remulos yells: We will battle these fiends, together! Nighthaven's Defenders are also among us. They will fight to the death if asked. Now, quickly, we must drive these aberrations back to the Nightmare. Destroy them all!
Eranikus yells: Where is your savior? How long can you hold out against my attacks?
Eranikus yells: Defeated my minions? Then face me, mortals!
Eranikus yells: Remulos, look how easy they fall before me? You can stop this, fool. Turn the druid over to me and it will all be over...
Tyrande yells: Elune, hear my prayers. Grant us serenity! Watch over our fallen...
Tyrande yells: Tend to the injuries of the wounded, sisters!
Tyrande yells: You will be forgiven, Eranikus. Elune will always love you. Break free of the bonds that command you!
Tyrande yells: The grasp of the Old Gods is unmoving. He is consumed by their dark thoughts...I...I...I cannot...cannot channel much longer...Elune aid me.
Eranikus yells: IT BURNS! THE PAIN.. SEARING...
Eranikus yells: WHY? Why did this happen to...to me? Where were you Tyrande? Where were you when I fell from the grace of Elune?
Eranikus yells: I... I feel... I feel the touch of Elune upon my being once more...She smiles upon me...Yes...I...
Eranikus, Tyrant of the Dream is wholly consumed by the Light of Elune. Tranquility sets in over the Moonglade.
Tyrande falls to one knee.
Tyrande says: Praise be to Elune...Eranikus is redeemed.
Eranikus says: For so long, I was lost...The Nightmare's corruption had consumed me...And now, you...all of you...you have saved me. Released me from its grasp.
Eranikus says: But... Malfurion, Cenarius, Ysera...They still fight. They need me. I must return to the Dream at once.
Eranikus says: My lady, I am unworthy of your prayer. Truly, you are an angel of light. Please, assist me in returning to the barrow den so that I may return to the Dream. I, like Malfurion, also have a love awaiting me...I must return to her...to protect her...
Eranikus says: And heroes...I hold that which you seek. May it once more see the evil dissolved. Remulos, see to it that our champion receives the shard of the Green Flight.
Remulos says: It will be done, Eranikus. Be well, ancient one.

Eranikus' title was the Green[6] and was classified as a green wyrm.[citation needed]