This article is about eredar in Warcraft III. For history and the eredar species in general, see eredar. For Warcraft III creep, see Eredar Warlock.

A demonic eredar in action. 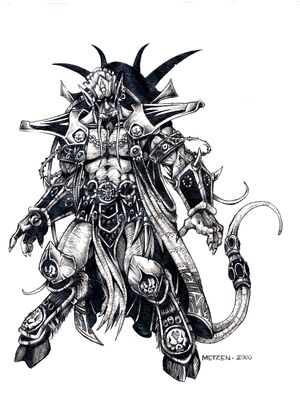 Eredar warlocks are the eredar type seen in Warcraft III.

Archimonde was the sole example of an eredar hero unit called the "Warlock".

Born of the eredar race, warlocks are absolutely corrupt and unimaginably powerful. Their chaos magics have burnt out whole worlds and annihilated countless species over the aeons. Kil'jaeden taught the orcs the secrets of warlock magics, but the orcs could never master the powers of entropy and destruction as well as the wicked eredar. Under Archimonde's command, the warlocks serve as the Legion's tacticians and strategists.[1]

Eredar creeps in Warcraft III were together known as "Eredar Warlocks".[2]

Eredar were supreme sorcerers at the dawn of the universe. Some believe that they devoured their own world by using radical warlock magics. They consumed all life around them and set out to find more places of mystical power. The eredar were Sargeras's first recruits in the Burning Legion, serving as tactical advisors and intelligence officers. Eredar warlocks are now counted as some of the greatest sorcerers in the universe.[3]

An eredar warlock led a group of demons in the tunnels from the Darkwhisper Gorge leading to the second Well of Eternity and were draining its waters. He planned to consume the water in a ritual in an attempt to gain enough power to resurrect Archimonde.[4]

Preeminence in eredar warlock society depends almost entirely upon magical power. Those who command the greatest selection of paramount spells - and thus in theory the greatest magical arsenal - rise to higher ranks. Those whose arcane abilities top out at such pitiful cantrips as wish and shapechange are grunts and lackeys, scarcely worthy of notice.[3]

Eredar warlocks are spellcasters first. They have been known to flick their fingers in an enemy's direction, causing flesh, bone, and even steel to flare with entropic fire. They avoid combat with even an innocuous foe until they can establish a collection of defensive and self-enhancement spells. Most maintain a mage armor or frost armor effect continuously. If the enemy seems weak and not worth the expenditure of spells, eredar warlocks wade into combat with their claws. If the enemy is strong, an eredar warlock creates an advantage of numbers, summoning monsters, enchanting his opponents, and using spells that divide his enemies.[3]