Erekem is an arakkoa mini-boss located in the Violet Hold. His escape comes with two adds. 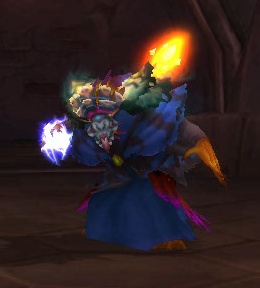 Erekem in World of Warcraft.

The Violet Hold's inmates include the most notorious of Outland's criminals, and Erekem is no exception. The Kirin Tor thwarted his plot to assassinate the Council of Six, but now the blue dragons have recruited this insidious arakkoa to achieve a more ambitious feat: wiping out every mage in Dalaran.

If both of Erekem's Guards are killed, he becomes enraged and attacks players with new abilities.

Erekem appears as one of the bosses that can be encountered in the Dalaran Heist single-player experience in the Rise of Shadows expansion for Hearthstone.