Erudax, the Duke of Below, is the fourth and final boss of Grim Batol.

Deathwing has dispatched one of his greatest lieutenants to discover the secret that several mighty red dragons have died to protect. From the cavernous realm of Deepholm, this faceless general will bring to bear the next generation of draconic power to obliterate those foolish enough to challenge him.

Erudax periodically casts Binding Shadows at random party members; it is a projectile-based AoE attack that should be avoided if possible; the debuff it leaves behind roots and damages players, as well as healing the boss. Enfeebling Blow will knock back the tank and place a +damage taken debuff; the tank should avoid re-engaging Erunax until the debuff has faded.

Eventually, Erudax will announce a Shadow Gale (The shadow's hunger cannot be sated!), spawning a dark swirl somewhere within his room. Party members must move to the center of the swirl to avoid Shadow Gale's AoE damage. After Shadow Gale, a Faceless Corruptor (two on Heroic difficulty) will appear at the doorway. The Corruptors cannot be stunned, but should be snared and killed before they manage to hatch any eggs. Should they finish casting Twilight Corruption, two Twilight Hatchling adds will appear and do random party damage through out the remainder of the fight; if the corruptors are not killed immediately after that, they will also heal Erudax for 20/40% of his health. This can and should be interrupted.

It is imperative that the Corruptor adds die before hatching any eggs. Consider explicitly assigning DPS to specific adds to ensure that both are snared and killed within the desired time frame. Root effects do not work, but slow effects do. Crippling poison, slow, frostbolt, frost trap, and chains of ice all are effective.

Aggro
The darkest days are still ahead!

Death
Ywaq maq oou; ywaq maq ssaggh. Yawq ma shg'fhn. ("They do not die; they do not live. They are outside the cycle." This is untranslated in game, but the same text Herald Volazj says. Mindbender Ghur'sha also utters an abridged version of this line on death.) 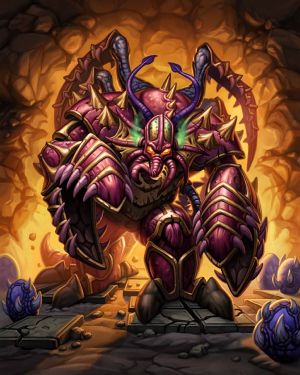 An "Eldritch Horror" in Hearthstone.