For tactics on defeating him in Throne of the Tides, see Mindbender Ghur'sha. 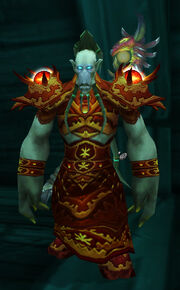 Erunak Stonespeaker is a powerful broken shaman and level 80 quest giver allied with the Earthen Ring. He is assigned to aid the Horde and Alliance in Vashj'ir against the naga allied with Deathwing and the Old Gods' forces.

of Kelp'thar Forest. He can later be found at Shallow's End, the Deepmist Grotto and next to the coil of rope for

[81] The Abyssal Ride in Kelp'thar Forest. In the Shimmering Expanse, Erunak makes an appearance inside Nespirah for the quest Nespirah. When he is captured by Ozumat in

[82] Defending the Rift, he is controlled by and later freed from Mindbender Ghur'sha by adventurers.

As part of the Elemental Unrest he was also in Stormwind's Trade District.

Erunak appears after adventurers were about to be captured by the naga, where he used a

[Conch Shell] to bring them to safety and would later assist the Horde and Alliance against the naga and other forces that were stationed at Promontory Point in the Abyssal Depths.

[82] Defending the Rift. However upon the battle's conclusion Erunak would be abducted and spirited away to the Throne of Tides. Once at the Throne he would be mind-controlled by Mindbender Ghur'sha until his rescue with the death of Ghur'sha. While grateful to be freed he is unable to further assists his rescuers as he needs time to recuperate.

[Sharas'dal, Scepter of Tides] after his friend Wavespeaker Adelee went missing there while looking for it. The naga, still within the Throne of the Tides, were torturing a sea giant named Grash which was promptly freed, who informed them that a naga named Lady Zithreen is using the Caduceus of Azshara to control the sea giants, makrura, and other residents of the seas. Erunak demands to know from Zithreen what Azshara's plans were for the Abyssal Maw during the events in Vashj'ir, but Zithreen does not tell him and Grash kills her. 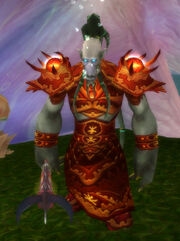 These are grave times for Azeroth, <name>.

We must discover the motives of the naga here.

If we manage to survive, we must try to discover its cause.

The naga could attack again any moment.

May I rest here?

Do you have any supplies?

I have never seen them so organized and disciplined before.

But first, we must find a more secure location.

We must find safe shelter soon!

We were fortunate to reach this place unnoticed.

May I rest here?

Do you have any supplies?