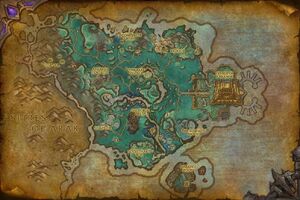 My squadron was caught by a wandering patrol. We fought fiercely, but the alarm had been raised. The rangari forced me into hiding before surrendering themselves to the enemy.

We need to get out of here, but how?

You will also receive: 35

It's hopeless. How are we going to get out of here? 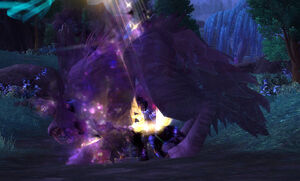 Fight through several waves of orcs, culminating with a fight against Terrorfang at the gates.

Shadowmoon Reaver yells: Terrorfang will put an end to you.
Yrel says: Thank you, <name>. I will meet you back at Twilight Glade.

I could never have done it without you, <name>. Your words unlocked something within me which I have not felt before.

Call it what you wish - resolve, conviction, faith. I will not soon forget this, <class>.

If not done with Velen's quests,

[91] The Clarity Elixir and

On completion of both this quest and

[91] The Fate of Karabor, Scout Valdez flies in:

Scout Valdez says: Commander! Shadowmoon forces are gathering up outside of the garrison. Our troops are in defensive positions and await your orders.