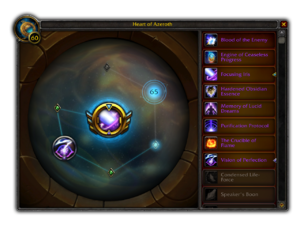 [Heart of Azeroth] interface with essences.

[Heart of Azeroth] powers added in patch 8.2 that can be gained after completing a questline[1][2] at level 120 once a character establishes a hub in Nazjatar. The Heart Forge lets players infuse their Heart of Azeroth with Essences to grant new combat-related powers.

What available Essences a character is able to use is based on their class role.

Essences used by all roles

Once you've collected a new Essence—obtained by participating in a wide variety of content—you'll head to the Heart Forge to infuse your Heart of Azeroth with it, “learning” the Essence and permanently adding it to your collection. Much like Talents, once you've learned an Essence, you'll be able to apply it or swap it out through a new Heart of Azeroth interface within rest areas, cities, or when using items such as the Tome of Quiet Mind.

Each Essence has both Major (generally active) and Minor (passive) abilities. Upon completing the initial quest from Magni, you'll open a single Major slot in the Heart of Azeroth. Placing an Essence in the Major slot grants you that Essence's Major active ability, which is added to your Spellbook. You'll also gain the benefit of any Minor passive abilities from the Essence.

Each Essence has four ranks that provide new effects. Rank 1 provides a unique ability based on your role (damage dealer, tank, or healer), while rank 2 and rank 3 provide enhancements to both the Essence's Major and Minor effects. Rank 4 adds a flashier cosmetic effect to the spell, providing a unique visual that will make you stand out from the crowd.[3]