Welcome to the Plaguelands, <name>. As you know, the Forsaken and their allies hold the lands to the west of here against our best efforts. The Alliance commanders have decided that here in the east, we will establish new fortifications to tighten the noose around our enemies.

Towers long abandoned since the days of Lordaeron are to be seized and rebuilt for this purpose. These lands are dangerous, and we could use your help. 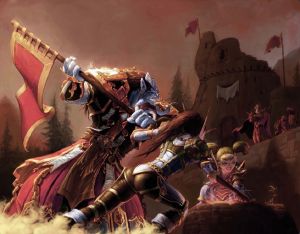 Very good, <name>. It will be important for us to hold these towers against future attacks, and for that we may need your assistance until reinforcements can be brought in to secure the area.

Bonus For the Factions

The faction that controls Crown Guard Tower gains the use of the nearby graveyard.

When Eastwall Tower is captured, a group of guards will spawn and help capture Northpass Tower if Northpass is in the hands of the other faction.

When Northpass Tower is captured a Shrine of Lordaeron will appear. Clicking on it will give the player a 5% health increase in Stratholme, Eastern Plaguelands and Scholomance.

When Plaguewood Tower is captured, a gryphon master will spawn and offer members of the controlling faction free rides to the other towers.