Estate of the First Arcanist 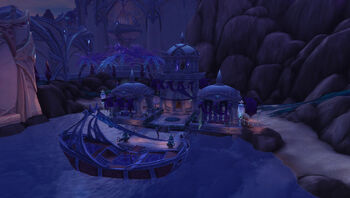 The Estate of the First Arcanist. 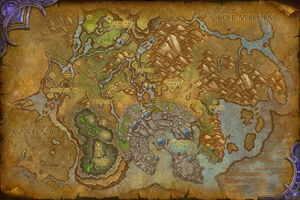 is a small manorhouse located just outside the eastern walls of the nightborne capital of Suramar City. The building and the surrounding estate were the property of First Arcanist Thalyssra before the outbreak of the Nightfallen rebellion and Thalyssra's subsequent alienation, after which it was ordered dismantled by Grand Magistrix Elisande.

The estate sits along a beach on the shores of Suramar Bay, and is generally austere by the standards of the nightborne nobility. It possessed a small dock and a number of transport boats, as well as a small garden containing dusk lilies (a flower commonly associated with First Arcanist Thalyssra). It has the distinction of being virtually the only building located outside Suramar's city limits while remaining within the confines of its magical shield. 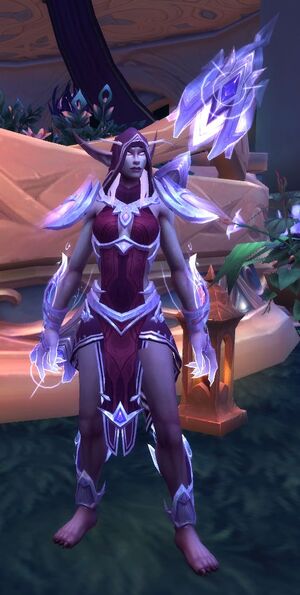 Before the lowering of Suramar's powerful arcane shield over 10,000 years after the end of the War of the Ancients, the estate of the First Arcanist existed in the possession of Thalyssra, First Arcanist of Suramar.

When the third invasion of the Burning Legion began, Grand Magistrix Elisande, Suramar's leader, chose to make an alliance with the demonic Legion in the hope of sparing the lives of her people. A close advisor to Elisande, Thalyssra vehemently opposed this decision, even attempting a coup to overthrow the Grand Magistrix before it was too late. The coup would fail, however, and Thalyssra herself would very nearly die in the attempt before managing to escape the city.[1]

In the aftermath of the failed plot, Thalyssra would form a rebel faction known as the Nightfallen with the goal of deposing the Grand Magistrix and expelling the Burning Legion from Suramar. As a result, Thalyssra's name was essentially blacklisted by Elisande's regime. As part of this, Thalyssra's estate was seized and ordered dismantled, with magisterial agents being sent to ransack the property and oversee its demolition.[2]

As the Nightfallen rebellion raged on, Thalyssra and her allies continued research into the combat potential of withered nightborne. To further these experiments, however, the First Arcanist required unique tools which remained in her estate in the city. She subsequently sent agents to recover an arcane amplifier from the manor, though aware that the location was likely under guard following recent events. Upon arrival, the Nightfallen operatives succeeded in recovering the parts of the amplifier, which had been shattered into pieces, and escaped with the tool.[3]

Several of Thalyssra's personal items were also liberated from the estate during the raid, including some clothing, arcane tomes, and private correspondence. The items were returned to the First Arcanist at the Nightfallen base in Shal'Aran.[4]

After the defeat of Elisande in the Nighthold and the victory of the insurrection, Thalyssra and the Nightfallen retook the estate along with the rest of Suramar City. The Duskwatch, now loyal to Thalyssra's regime, were stationed to guard the compound, and it became the primary abode of the First Arcanist once more.[5]

Some time between the end of the Argus Campaign and the commencement of the Fourth War, Thalyssra met with the blood elf Lady Liadrin in the estate to discuss the possible entry of the nightborne into the Horde. After a short discussion, Thalyssra, Arcanist Valtrois, and Silgryn departed from the estate to travel to Silvermoon City.[6]