This article is about the raid. For pre-Sundering palace, see Azshara's Palace. 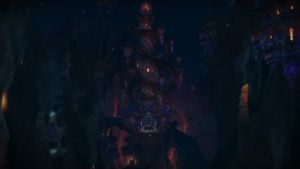 Exterior of the Eternal Palace. 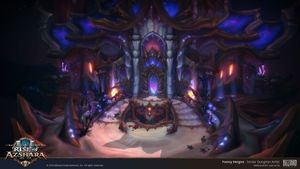 Entrance of the Eternal Palace.

The Eternal Palace is the royal seat of Queen Azshara and the Nazjatar Empire. It was built after the Sundering alongside the rest of Nazjatar. After opening the waters around the naga homeland, Azshara invited the Alliance and Horde forces wrecked there to her palace, where she tried to fulfill her mischievous plans.

In Rise of Azshara, the Eternal Palaces serves as a raid in the zone of Nazjatar, with Queen Azshara herself as the final boss. It is entered through the whirlpool in the Gate of the Queen, in which a water current will transport the player in-front of the raid entrance. To return, the Displacement Pedestal near the stairs is used to teleport you back to the Tidal Conflux.

Ten thousand years ago, as the seas engulfed Zin-Azshari, Queen Azshara forged a dark bargain with N'Zoth that transformed her loyal subjects into the sinister naga. Through millennia of brutal conquest, Azshara has built a new empire from the ruins of the old and now holds dominion over the depths that once threatened to claim her. Ever the gracious host, she has invited the Alliance and Horde alike into her eternal palace to witness her glorious ascension... and their ultimate demise.

The dangers of Nazjatar were merely preamble. Breach the palace gates and descend into Azshara's deadly domain.

Depths of the Devoted

Azshara's most valued retainers are as deadly as they are loyal. To face the queen, one must first face her court.

The Circle of Stars

Every path has led to her... to him. Prove worthy of the waking dream. Drown! Drown, and let all eyes be opened! 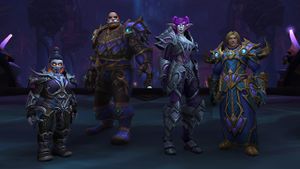 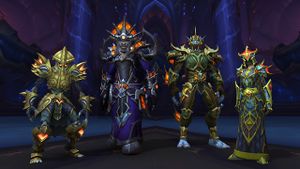