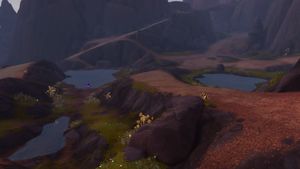 The Eternal Spring is a verdant oasis nestled in a valley with three shallow pools of water, just northwest of the Temple of Akunda in southeastern Vol'dun.[50.4, 86.4]

The spring is a gift from the loa Akunda to his followers; Akunda commands the storms, allowing the spring to never run empty. This ensures that those within the Temple of Akunda never grow thirsty, but the eternal water source also attracts a wide variety of animals that are a plague upon the temple,[1] mainly hyenas and gazelles. A small cave in the northeastern part of the spring contains the Shrine of Thunder, where aspiring followers of Akunda meditate to cleanse their minds of their inner demons.[2] A Mysterious Trashpile lies semihidden under a stone arch on the northwestern side of the oasis.

Akunda the Exalted poisoned the Eternal Spring with his alchemy, sickening all who drank from it, including Akunda himself.[3][4]

Zenbaro asks adventurers to fill his canteen with water from the Eternal Spring to sate his thirst before he dies.

At the Shrine of Thunder during