Ettins are a race of two-headed giants found in several highland areas around the Eastern Kingdoms, mostly in the Twilight Highlands, the Redridge Mountains and the hills and forests of Gilneas and Silverpine. They are also found in Highmountain on the Broken Isles and in Kul Tiras.

The ettins of Silverpine came from Gilneas, and now wander the land searching for their next juicy meal, though the Forsaken have managed to subjugate and utilize some of them to haul their wagons throughout the forest.[1] Many ettins have also been enslaved or recruited by the Twilight's Hammer cult.

The ettins of Highmountain seem to operate under some sort of hierarchy above their already existing tribal network, as Hill Prince Urgo, like his father before him, was destined to be the lord of all the hill ettin tribes in Highmountain.[2] They build armor from stolen Gilneas houses and Suramar ruins, and some forge their own armor. The ettin of Highmountain eat tauren that have been cooked over bonfires.[3]

The skin of an ettin is thicker than that of a dragon, and half as pliable.[4] 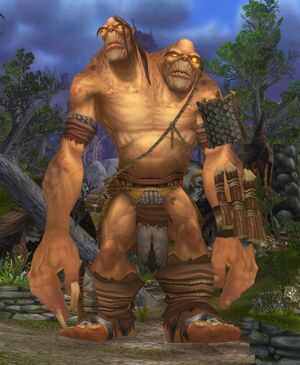 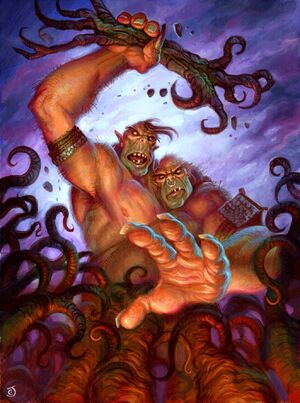 Another ettin in Hearthstone.

The ettin also appear in Manual of Monsters Appendix Three with the following description:

Ettins are two-headed giants who tower over normal humans. These creatures were the necromancers' first attempt at creating the feared abominations, but they proved too stupid and dangerous to be used even as shock troops for the Lich King's soldiers. Some of them escaped annihilation and have created a few villages. Their mud-and-dung hovels clump together against ravines and in other barren places, and ettins spend their time trying to figure out the nature of fire. Because it seems so difficult, they often prefer to eat their orc raw.

Ettins live in the mountains and valleys of Azeroth, preferring to keep far from civilization. In order to do so, they often inhabit the most desolate and barren territories -- literally, the land no one else wants. Still, ettins make their living not only from hunting but also from primitive agrarian efforts.