Not to be confused with Evergrowth. 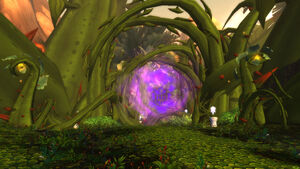 Entrance to the Everbloom

The Everbloom, is an outdoor dungeon introduced in Warlords of Draenor, set in Gorgrond. The entrance can be found in Everbloom Wilds near Grove Warden Yal. A Kirin Tor flight path is nearby.

The Kirin Tor expedition was sent to establish presence within the overgrowths of Gorgrond and create an alternate access point to Draenor since the Dark Portal was shut down, but all contact with the mages of the Violet Bluff was lost after they were overrun by the forces of Primals, led by a fearsome genesaur named Yalnu. Archmage Sol's brain has been infested by spores that turned her and most of the expedition against their allies, and a portal link to a Kirin Tor camp located at the outskirts of Stormwind City is still active, attracting the fearsome genesaur and his underlings towards Azeroth, where they can spread unchecked without their eternal enemies, the Breakers opposing them.

After the disruption of the Dark Portal, the Kirin Tor realized that to fight the Iron Horde on their own soil, they would need a supply line for reinforcements. Thus, they created outposts across Draenor with magical links back to Azeroth. Unfortunately, what seemed like a prime strategic location near the Blackrock Foundry was known to the botani as The Everbloom, a sacred place within Gorgrond woodlands. The outpost was quickly overgrown, but it still contains a link to the outskirts of Stormwind... 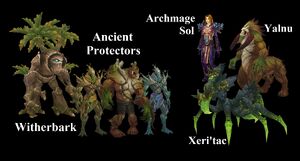