From Wowpedia
(Redirected from Everlook (faction))
Jump to: navigation, search

Everlook is a trading post run by the goblins of the Steamwheedle Cartel. It lies at the crossroads of Winterspring's main trade routes and contains a goblin laboratory. 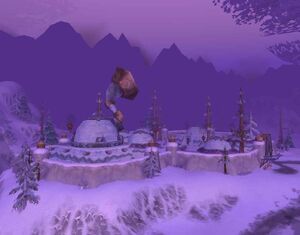 Everlook as seen from an incoming flight.

Reputation for Everlook and the Steamwheedle Cartel is mostly gained from quests in Winterspring. Having a Friendly or higher Reputation will make the Guards help you in case of initiated violence against you.

Everlook, located on the far east side of Winterspring,[1] is the only major goblin outpost in northern Kalimdor, and this trading post serves several purposes. First, it serves as the base of operations for goblin thorium and arcanite miners, since Winterspring has some of the few untapped veins of those materials on the continent. Second, it serves as a center of trade to all races and factions, including the Alliance and the Horde. While Everlook is hardly as safe as Moonglade, generally the two factions treat each other fairly well there. Everlook would offer a commanding view of Kalimdor, if it were not at such a high altitude that clouds constantly shroud the mountain's lower flanks.[2][3]

The recent success of Everlook has brought more adventurers into Winterspring, which the natives hope will aid them in defeating the threat of the demons of Darkwhisper Gorge.[4]

Additionally, Everlook is a frequent stop-off and resupply point for the faithful who make the pilgrimage through Winterspring to Hyjal Summit as this town is the last point of civilizations before reaching the Summit. While pilgrims allowed to venture up to the World Tree Nordrassil stop here, this is the highest that merchants and explorers may venture without the night elves' permission.[2][3]

The town is also the home of the Thorium Brotherhood, a group of self-righteous Dark Irons who think they are the best smiths in existence. Led by Malyfous Darkhammer, the brotherhood sells their thorium goods for ridiculous amounts of gold. When visiting Everlook, Brann Bronzebeard was tempted to show them what a real smith (and a real dwarf) could make, but he decided it was a waste of his time to even pay attention to them, and he suggests others do the same. Brann attached a catalogue of the garbage Malyfous tries to sell here, though even a novice would know that his prices (and the wares he offers in the first place) are simply ridiculous.[2][4]

The goblins here recently discovered a new mine to the south of their city, not far from the dragon caves of Mazthoril. This mine is valuable due to a large amount of arcanite within it, but thus far it proves inaccessible. While not part of the blue dragon's cave complex, the dragons are territorial, and so the goblins are looking for a hero that can find a way to convince the blue dragonflight to allow them access to the mine, in exchange of a nice reward of course.[4]