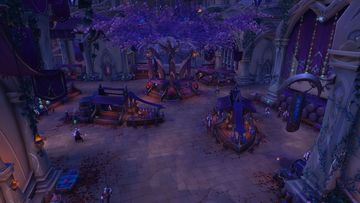 The Evermoon Bazaar is a plaza located in the Evermoon Commons district of the nightborne city of Suramar. It can be found in roughly the center of the commons, in the southwest portion of the city, and acts as a commercial hub for much of the surrounding area.

Numerous stalls and shops exist throughout the bazaar, specializing in standard nightborne commodities, including the valuable arcwine. The plaza has a waterfront facing into Suramar Bay (just across the water from Astravar Harbor) and hosts a jetty to accommodate transport boats. Lately, the bazaar—along with the rest of the district—is heavily patrolled by Duskwatch security forces in response to the outbreak of the Nightfallen rebellion in Suramar.

When the Nightfallen rebellion erupted in response to the admittance of the Burning Legion into Suramar City, the entire nightborne race was thrown into upheaval. The city itself became a battleground between insurgent agents and those loyal to the regime of Grand Magistrix Elisande. The city's western districts, where the Evermoon Bazaar is located, quickly became a major focus of both sides, with the rebels seeking to protect and gain the support of the lower classes, while the Grand Magistrix's forces attempted to brutally put down any form of insurrection.

In an attempt to starve the district into submission, the authorities began rationing the amount of arcwine available to the residents, leading many to suffer greatly from the lack of the Nightwell's energy needed to feed their addiction. Large stocks of arcwine could still be found in the Evermoon Bazaar, often under guard, and this became an objective of the Nightfallen rebels. Large quantities of arcwine were frequently stolen from the bazaar by Nightfallen agents, who would subsequently distribute it to those in need.[1] Security operated by the Duskwatch in the Evermoon Bazaar at this time remained extremely high as a result.

As the conflict progressed and the rebellion continued to secure advantages and allies, armed fighting between the Duskwatch and insurgents began to break out in the plaza and the surrounding district.[2] Rebel propaganda posters started appearing throughout the bazaar, detailing the great advances made by the insurrection.[3]