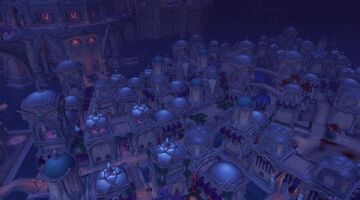 The Evermoon Commons is a major residential and commercial district in the southern portion of the nightborne city of Suramar on the Broken Isles. Located along the city's southwestern waterfront, the district houses a large portion of the nightborne citizenry, particularly those of the lower and middle classes. In addition to this, the Evermoon Commons also plays host to a wide selection of shops and economic fixtures, such as the Evermoon Bazaar.

Canals separate the commons from the Starcaller Retreat, Artisan's Gallery, and Shimmershade Garden in the west, and the Terrace of Order to the north. The Nighthold, seat of Suramar's rulers, and Astravar Harbor lie a short distance across Suramar Bay to the east.

In recent times, the district has been heavily involved in the Nightfallen rebellion, with the Evermoon Commons itself acting as an important support base for the nightfallen insurgents attempting to overthrow Suramar's government. A great deal of sympathy for the rebellion was consistently nurtured among the district's residents, who suffered greatly from the callous policies of Grand Magistrix Elisande.

The Evermoon Commons occupy a section of the innermost 'ring' of the layout of Suramar City. Its name is consistent with the style of the ancient Kaldorei Empire, and may have been established prior to the Great Sundering and Suramar's subsequent millennia-long isolation under its arcane shield.

At the time of the third invasion of the Burning Legion, Suramar City was once again reopened to the world with the deactivation of its shield. Before long, a major civil conflict in the form of the Nightfallen rebellion erupted among the nightborne people. The rebels, seeking the overthrow of Grand Magistrix Elisande, quickly began to foster support in the city. In particular, the southern portions of Suramar, home to the city's lower classes, served as a major focus of Nightfallen efforts.

In response to this unrest, Suramar's authorities established effective martial law over much of the city. Duskwatch security forces, frequently accompanied by demons of the Burning Legion, occupied and patrolled the Evermoon Commons and surrounding districts. Its residents were regularly harassed, and sometimes even killed, in the streets in an effort to quell the rebellion.

Arcwine, used by the nightborne to feed their addiction to the Nightwell, was severely restricted and rationed to the majority of nightborne people on the orders of the Grand Magistrix in an effort to assert control. Denizens of the Evermoon Commons in particular suffered heavily from this policy, with many dying or withering in the streets from lack of magical energy. The Nightfallen rebels widely distributed arcwine to the district's residents at this time in order to help alleviate the suffering,[1] and often intervened directly when citizens were assaulted by the Duskwatch.

As the conflict within the city escalated, harsher measures began to be imposed by Suramar's regime. This cultivated in the massacre at the Waning Crescent, located right beside the Evermoon Commons, where Duskwatch and demonic forces systematically slaughtered dozens of civilians in what was known to be an area of the city sympathetic to the rebel cause.[2] In the aftermath of the attack, the Nightfallen headquarters in the vicinity was moved to the nearby Evermoon Terrace in the Evermoon Commons.

By the time of the final stages of the rebellion, armed insurgents began to actively take control of certain areas and safehouses in the commons,[3] as outright fighting exploded in the streets themselves.[4] This was coupled with a rebel propaganda campaign, which planted posters in numerous locations around the district to rally more to their cause.[5]