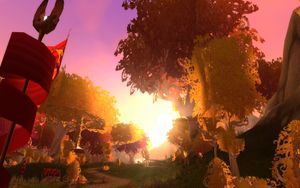 Eversong Woods during the day.

Eversong Woods is a reclaimed section of the Eversong Forest.[1] It is the starting zone for the blood elf race, introduced in World of Warcraft's first expansion set — The Burning Crusade. Eversong lies in the northern part of Eastern Kingdoms, and is the location of Silvermoon City, arguably the largest and oldest surviving capital in the world of Azeroth.

The blood elves have called the resplendent Eversong Woods home for millennia, but the stewardship of this forested region has not been without its perils. Bent on harnessing the elves' mystical Sunwell, Prince Arthas and the Scourge carved a path of destruction through the heart of Quel'Thalas during the Third War, leaving a tainted scar across Eversong Woods. Thus far the elves have worked extensively to drive the lingering undead from their lands and cleanse the wounds of Arthas's assault, but the task is far from over. As Quel'Thalas looks toward a new future, ensuring the safety and well-being of Eversong will be a critical first step.[2]

Eversong Woods was once visually indistinguishable from its southern woodlands, now called the Ghostlands, and together they comprised the Eversong Forest. Thousands of years ago, the forests were claimed by the Highborne, eventually naming themselves the high elves, who battled the resident Amani populace and took the land for their own. The elves established the Kingdom of Quel'Thalas, and northern Eversong contained the heart of their empire for millennia; the elves' capital of Silvermoon was established at the forest's northernmost tip, near the ocean. The elves interwove their architecture to complement Eversong's natural landscape, blending the natural and their arcane-empowered structures together in beautiful ways. The elves lived in relative harmony with the creatures of the woodlands.[3] The magi erected numerous runestones throughout Eversong, to serve as a dampening field that would limit the potency of all non-elven magic.[4] They also magically locked Eversong into a state of perpetual springtime.[5] Shortly after Quel'Thalas was founded, the elves created a legendary bow named Thas'dorah, carved from the bark of the mother tree of Eversong. Named Thas'alah, or Light of the Forest, this tree was the oldest in all Quel'Thalas' woodlands, and its roots absorbed the energy of the Sunwell. From its enchanted branches, the entire region seemed to be bathed in the glow of an eternal spring.[6]

Although the woods have seen their share of battle between the elves and their relentless neighbors, the forest trolls, the region retained a harmonic and peaceful feel for much of its history, standing strong for over 7,000 years to come. Its defenses were tested during the Second War, in which the edges of the forest mysteriously began to burn. The invaders responsible reached the northern forest but were unable to overcome Silvermoon's great defenses, and the violence was soon quelled. In its aftermath, the Amani, who had allied with the fel-crazed orcs, were mercilessly hunted down within Eversong and beyond.[4]

In the Third War, Eversong lay witness to the horrors that the death knight Arthas brought upon the land during his invasion, and the forest has been permanently scarred by the death wrought by the hordes of undead - a huge, plagued tracing of land was torn through the center of Eversong, known as the Dead Scar, which now stands in stark contrast to the rest of the forest. Countless elves were slaughtered in Eversong, including their ranger-general, Sylvanas Windrunner. The elven grand magister, Belo'vir Salonar, took over the defense of Silvermoon after her death, but the capital was also unable to withstand Arthas's onslaught. After Arthas had reached his goal on Quel'Danas and abandoned Quel'Thalas to its fate, the remnants of elves in the woods gathered under the banner of Lor'themar Theron, who safeguarded the ruined kingdom while searching for any other survivors.

Quel'Thalas's king and ruling council had been slain during the onslaught, leaving Kael'thas Sunstrider as the rightful ruler. Kael rushed home to witness the damage to his kingdom with his own eyes, and reunited with his people, renaming them the blood elves in honor of all those perished. Kael'thas left his new regent, Lor'themar, in charge of Quel'Thalas, while he took the strongest elves to battle alongside the Alliance in Lordaeron, and later Illidan Stormrage on Outland.

Most of the blood elves remained behind with their regent, seeking to reclaim their land. Downtrodden and weakened by an addiction to magic that had become apparent after the destruction of the elves' Sunwell, the elves made little progress with this until the return of Grand Magister Rommath, who reinvigorated his people with the use of a technique taught to Kael on Outland: mana draining. The elves gathered their strength and began reclaiming and rebuilding; fortunately, most of Eversong was not beyond healing, and the Scourge's defilement that had ruined the Ghostlands to the south was able to be halted at Elrendar.[4] Most of the blood elves remained in Eversong to continue rebuilding, while others turned their attention to the Ghostlands, hoping to drive the Scourge out of their beloved kingdom forever.[4] Large portions of Eversong were reclaimed, and Silvermoon City rose again, but other threats, some old and some new, were looming on the horizon. 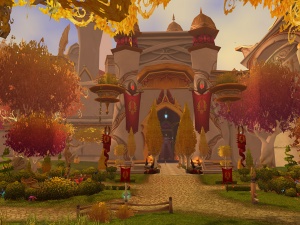 Eversong Woods is the blood elf starting zone in World of Warcraft: The Burning Crusade. In the wake of Arthas's invasion, much of Eversong has been reclaimed, but not without cost. The destruction of the Sunwell adversely affected some of Eversong's wildlife (along with the elves' own arcane creations), driving some erratic and hostile. Dealing with this, along with understanding every blood elf's innate addiction to magic, is among the first thing blood elf adventurers must do. Eversong is also troubled by the Wretched, a group of disheveled, violent mana-addicts who could not balance their dependency on the arcane. Having grown bold with the advent of the elves' recent losses to the Scourge, the Amani forest trolls have made incursions into Eversong, diverting the Farstriders' attention. A south-western portion of Eversong, now known as the Scorched Grove, was burned by the elves in an effort to halt the corruption and the Scourge's advance; while successful, it also turned the local treants hostile.

With the Sunwell gone, the elves began using their arcane sanctums around Eversong to syphon arcane power from ley lines in Quel'Thalas. They also revitalized several of the runestones to heighten their defenses, which had fallen into disrepair.

Although much of Eversong is restored, the Dead Scar remains a constant reminder of the Scourge invasion. The blood elves looked into ways to heal it, but investigating magisters deemed it too tainted and beyond saving. Roughly half of Silvermoon City was reclaimed; however, its western half remains deteriorated, the Dead Scar slicing through it.

The Blood Hawks seem to be the guards of the forest.

During the second Scourge Invasion, Eversong was attacked by the Scourge.

Much work has been done to retake Eversong, but much more remains before the wounds Arthas inflicted can be fully healed.[2]

After the Argus Campaign, Sylvanas, Vereesa, and Alleria Windrunner reunited in the forest and traveled through the Dead Scar to the Ghostlands, fighting Scourge minions along the way.[7]

As part of a ceremony of remembrance held each year in the kingdom, a blood elf adventurer traveled through Eversong to reenact the defense of their lands during the Scourge invasion of Quel'Thalas. The evacuation of Fairbreeze Village is experienced, as well as Sylvanas Windrunner's final stand against Arthas as the elves attempted to bar the Scourge's rampage.[8] The ceremony continues on the Isle of Quel'Danas.

Eversong Woods stand in perpetual spring, with some elements of autumn, with golden leaves falling from the trees.

As yet there are no dungeons of any kind and no battlegrounds in Eversong Woods. However, there is an unknown wooden gate at Tor'Watha, just as seen in the Ghostlands (leading to Zul'Aman) in the southeastern portion of the zone. It can be assumed this is a portal leading to an unknown instance, to be implemented sometime in the future, or it could have been the original entrance to Zul'Aman.

The blight still spreads through Eversong Woods, but the Runestones located in the south prevent the blight from spreading any further. One Runestone has faltered though, and the blight has corrupted it. 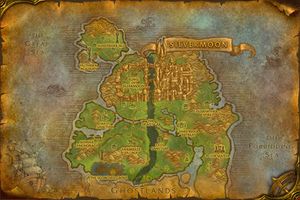 Artwork of the path of destruction.

Eversong Woods is home to several characters of note. At the Sunspire, Magistrix Erona welcomes new recruits of all creeds into action. At Falconwing Square, Aeldon Sunbrand attempts to cleanse the tainted presence of the pitiful Wretched. And at the Farstrider Enclave, Lieutenant Dawnrunner sends bold adventurers into the lands of the forest trolls in order to keep them at bay. 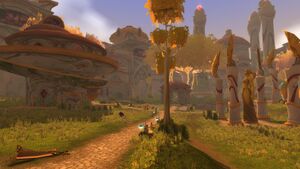 As the blood elf starting zone, Eversong Woods is primarily designed for quests between levels 1 and 12. Though only blood elves can do the quests on Sunstrider Isle, the other quests are open to all Horde races. Quest lists are available by level and by location. 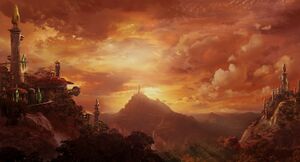