For the character from the main universe, see Exarch Maladaar.

Maladaar is one of the five Exarchs, the leaders of draenei society under Prophet Velen. As the Speaker for the Dead, Maladaar leads the Auchenai, a group of vindicators and soul priests who watch over the draenei's most sacred of precincts, Auchindoun, where the souls of departed draenei rest. He leads the reclamation of Shattrath City from the Burning Legion.

At some time prior to the Iron Horde's invasion of Azeroth, Exarch Othaar - a Sargerei traitor in the Exarchs - arranged for the Iron Horde to capture Maladaar,[1] expecting that the orcs would kill him. Maladaar was held in the the Tanaan Jungle by the Shattered Hand and tortured, until the champions of the Alliance and Horde freed him along with Drek'Thar during the Assault on the Dark Portal.[2] Maladaar joined them in their escape from Tanaan Jungle, and upon entering Umbral Halls he and Qiana Moonshadow went to scout the cave.[3] Soon after, he returned to inform Khadgar and they left the cave. Eventually he battled against the Blackrock in Blackrock Quarry. After the battle, he and Yrel healed the draenei escapees.

When the forces split up Maladaar followed Yrel and the Alliance champion to Shadowmoon Valley.[4]

The Pursuit of Justice

On the matter of what to do with this troubling development, the Exarch Council proved divided, each leader with their own opinion of how to best guide their people. Maladaar chose to be proactive, and, after the murder of Exarch Hataaru, he left of his own volition to investigate Hataaru's death, even though Exarch Akama and Othaar were against it.[7] Maladaar and Soulbinder Nyami performed a ritual to summon forth Hataaru's spirit to identify his killer, and though Maladaar learned an exarch had a role in his death, Nyami abruptly ended the ritual after Maladaar asked Hataaru who killed him and Hataaru pointed at her.[8]

Maladaar asked the Alliance champion to help him install a device on Exarch's Rise to help root out the traitor, which exposed Exarch Othaar as the traitor. Exarch Othaar transformed into a man'ari and renamed himself Socrethar, but fled upon being weakened by the Alliance champion, warning the other exarchs that their days were numbered. Maladaar, fearing there may be other traitors among the draenei's ranks, departed for Talador with Nyami to see to the safety of Auchindoun.[9]

In the Shadows of Auchindoun

When Maladaar arrived he found Auchindoun under siege by the Shadow Council under the personal command of Gul'dan and Teron'gor. With the assistance of the champion, Maladaar discovered that Teron'gor planned to conqueror Auchindoun to feast on the souls therein and that the Shadow Council had already begun subverting the Auchenai's defenses with the help of Sargerei agents. Lady Liadrin and the Sunsworn, a force of blood elves who have came to Talador's aid against the Legion, joined with Maladaar and the Auchenai. Maladaar and Liadrin's forces then began a counter-offensive, holding the line at Auchindoun itself and undoing the Legion's work in the nearby city of Telmor.

As this was happening, Nyami left Maladaar, stating she would confront and defeat Teron'gor herself. Maladaar, concerned for her safety, asked the champion to find her. The champion found her holding Teron'gor's

[Demonic Gateway] open, and when the champion, Maladaar and Liadrin charged through the portal the trap was sprung. The portal led to the destroyed world of Xandros where Gul'dan and Teron'gor lay in wait to kill them with the help of the pit lord Mongrethod. Though Maladaar and Liadrin were victorious over the annihilan, Gul'dan and Teron'gor took advantage of the distraction to break through the defense of Auchindoun in a bloody rush. When Maladaar, Liadrin and the champion arrived back at Auchindoun they found the entrance paved with corpses and no sign of where Teron'gor and Gul'dan had gone. He informed Khadgar about Teron'gor's infiltrating of Auchindoun. 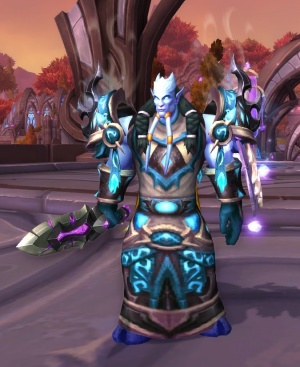 Maladaar, along with the Sha'tari Defense, Auchenai soul priests, and Liadrin's Blood Knights, arrived at Shattrath to take back the city from the Burning Legion and Sargerei forces. Maladaar and Liadrin eventually confront and kill Socrethar himself, paving the way for the Auchenai to retake Shattrath in time.

Maladaar later presides over Yrel's trials of the exarch. He praises both Yrel and the player's abilities, and christens Lady Yrel as Exarch Yrel before the gathered crowds.

He is ultimately seen with the other Exarchs at the Gates of Tanaan confronting Warchief Grommash after the death of Azuka Bladefury.

While Yrel and the forces of Lunarfall infiltrate Tanaan by sailing in from the east, Maladaar leads an attack on the Path of Glory in Talador alongside Durotan and destroys the gate to Tanaan. This opens up a new battlefield with the Iron Horde on The Iron Front, which he presides over for the Hand of the Prophet. After he was checked with the commander, he sent him to three agents, that were scouting the Tanaan terrain.

Maladaar is ultimately seen with the other Exarchs in Karabor as he the commander receives the blessing of the naaru K'ara.

A traitor among us - a fallen Exarch!

Speaker for the Dead (Talador)

The Light is screaming for aid.

The spirits within Auchindoun grow restless. Darkness is near.