Exarch Naielle was the leader of Rangari. She led her followers by example, spending most of her time in the wilds with the other scouts.[1] 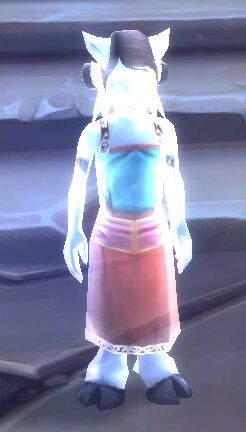 As a child, Naielle lived in Mac'Aree on Argus. An echo of her can still be found there, watching a jed'hin match at the Circle of Aspirants. She animatedly mimics the motions of the competitors.

Following the fight with the darkened naaru K'ara, Prophet Velen's visions became uncertain. His judgement was no longer without fault, and Velen believed that it would be disastrous if he were the only leader among his people. Thus, a council of sages that would oversee different aspects of draenei culture was created and Naielle was chosen as one of these "exarchs" to lead the recently formed Rangari. Their task was gathering valuable intelligence about the lay of the land, in order to use it for their advantage.[2]