For the character from the main universe, see Exarch Orelis. 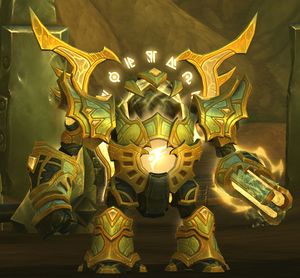 Exarch Orelis in his warframe.

Exarch Orelis is an exarch of the Lightbound and serves High Exarch Yrel. He personally led the initial attack against Beastwatch from Evermorn Hold. When Overlord Geya'rah, Eitrigg, and a Horde Champion confront him he asked the Mag'har to cease their defiance and welcome the light. When they refused, he entered into battle against them within his warframe. During the fight, he accused the Mag'har and their hatred for the reason as to why Gorgrond had become a listless dust. He is ultimately killed by the trio, where he only remarked on his failure to Yrel.