This article is about the draenei city. For the in-game faction of the same name, see Exodar (faction).

The Exodar (pronounced EX-o-dar)[1] is the draenei's enchanted capital city located on Azuremyst Isle. It is a dimensional ship satellite structure of the dimensional fortress known as Tempest Keep that crashed on Azeroth. Like other dimensional ships, the Exodar was able to transcend dimensions, and warp time itself[2] but that is no longer the case since the ship is beyond repair and now acts solely as the new home of the draenei on Azeroth.[3]

The faction associated with the city, Exodar, is named after the ship itself.

The Exodar in the TCG, actually the Crash Site

The Exodar's history is a short one, beginning with its departure from Draenor and its short journey through the Twisting Nether to Azeroth.

At some point before the present, the naaru arrived in the realm of Outland with a "dimensional fortress" known as Tempest Keep. The naaru dispersed throughout the ravaged world, leaving the fortress defenseless. Seeing an opportunity to strike, Kael'thas Sunstrider and his many blood elf legions assaulted Tempest Keep and captured it, taking possession of its treasures and kidnapping the sole naaru occupant, M'uru, sending him back to Silvermoon City for the magisters to utilize in their thirst for magic.[4] M'uru later becomes a boss in Sunwell Plateau, transforming into the corrupt Entropius.

Velen, the courageous prophet who had led the draenei people since their exodus from Argus millennia before, had hid with the remainder of his people in the wake of the Legion-instigated orcish onslaught. With the Broken Farseer Nobundo, first of the draenei shaman, at his side,[5] the Prophet personally led a raid on Tempest Keep to wrest control of one of its satellite structures, the Exodar.[6]

It is unknown how the draenei accomplished this, or what happened next, but the draenei took control of the Exodar and used it to escape Outland. The blood elves (and/or the draenei traitor Sironas), discovering what the draenei were planning, sabotaged the dimensional engines of the vessel. When the draenei activated it, the engine malfunctioned and sent the Exodar hurtling out of control through the Twisting Nether until it reached the closest habitable planet, Azeroth. The crippled ship screamed across the skies of Northern Kalimdor, crystals flying everywhere, until it crash-landed on a small island chain off the coast of Darkshore. The survivors took the islands as their new homeland, and set up their new capital in the largest intact portion of the still-smoking ship. The surviving blood elves regrouped and, after scouting the area, summoned reinforcements from Tempest Keep with the Sun Gate.

Contamination of the Azuremyst Isles

The Exodar's crash caused power crystals from the Exodar to break apart from the ship and land on the island, an event the Stillpine furbolg call the "crystal storm."[7] These crystals would then be ingested by the nearby nightstalkers causing them to become infected with corruption. Exarch Menelaous, from Azure Watch, fearing that the infection will spread if left unchecked assigns young adventures to purge the forests of infected cats.

Never seen in Nagrand, the first red elekk calves were born in Azeroth after the Exodar's arrival. Some breeders theorize that the unique coloration is somehow caused by the same radiation which ravaged Bloodmyst Isle.[8]

The long-term effects of the contamination caused by the Exodar are still under observation.[9]

After the Shattering, The Exodar is nearly repaired. According to Vindicator Romnar, all key systems have been repaired, and they are now just cleaning up and bolstering any areas of apparent weakness. He states they should have The Exodar up and running, and operational within a week, and by the end of the short story Vindicator Maraad announces that it has been fully repaired.[10]

After the Legion attacked the Exodar and slays O'ros, Velen orders Grand Artificer Romuul to begin repairs on the Vindicaar and states that the draenei are going home.[11]

The priest champions of the Conclave visited the Exodar in order to get pure Light. They were attacked by shivarra assassins led by Crystalbreaker Niika.[12]

The Exodar contains a large amount of technological wonders (due to its origins lying within Tempest Keep) such as magically enchanted "wires" which transport holy energy throughout the ship to power the various systems — heating and lighting — and fueling the draenei's already considerable powers.

The Exodar is divided into four main areas, a large central hall with three major wings. All the wings are connected with smaller hallways as seen on the map.

Broken miners harvesting crystals in the northern section of the Crystal Hall.

The draenei and other Alliance players can access the city by using either a spiral ramp that leads to the heart of the Exodar from the main entrance, or another ramp down from the harbor-side entrance that leads into the Vault of Lights.

The main entrance ramp has one extra sub-level where an inn is located. Also, the cooking trainer and supply vendors are located nearby at this small platform.

The harbor side ramp is occasionally used by Horde players that attempt to raid the Exodar.

The Exodar lost several parts while crashing over the Azuremyst Isles, including a menagerie, escape pods at the Pod Cluster and Pod Wreckage, another big piece over Ammen Vale, a Cryo-Core, a Vector Coil and a Warp Piston.

The Caregiver Center inn is hosted by Caregiver Breel.

The faction is named Exodar and is led by Prophet Velen, located near the battlemasters in the Vault of Lights. The naaru O'ros can be found on the lowest level of the Seat of the Naaru. Farseer Nobundo, the Broken that accompanied the draenei out of Outland, is also present as a shaman trainer more recently Nobundo has left to assist the Earthen Ring in the mending of the world.

Following points of interest are found in the Exodar: 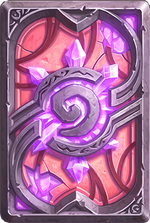 A card back themed after the Exodar in Hearthstone.